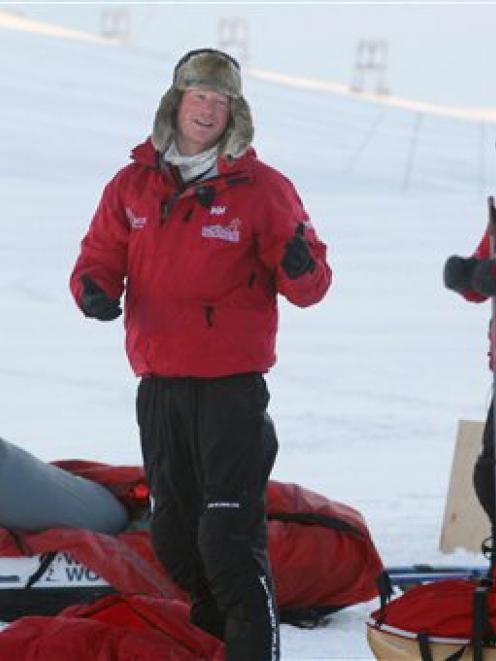 Britain's Prince Harry after packing up his tent, during training for the Walking with the Wounded expedition, on the island of Spitsbergen, situated between the Norwegian mainland and the North Pole. (AP Photo/David Cheskin, Pool)
He's been filmed trekking through the Arctic, gives a smouldering look from the cover of a men's magazine and is being targeted by legions of young women who only a few years ago would have been lusting after his older brother.

With all the attention being paid to Prince Harry, you might forget that Prince William's the one getting married.

"He's a cool guy, he's an action man, and he obviously enjoys quite a good time," said Robert Johnston, associate editor at GQ magazine, which featured a front page, black-and-white photo of the 26-year-old royal. "It's quite a potent mix."

This week's magazine shows a pensive prince, square-jawed and tousle-haired, his lips curling into a smile. GQ's story covers Harry's high-profile polar expedition with Walking With The Wounded, a UK charity devoted to helping injured veterans.

It's work that has commanded a fair amount of television time given the dramatic crises gripping the Middle East, North Africa, the Ivory Coast and Japan.

Camera crews have tracked the prince as he goes through his punishing Arctic training, plunging into ice-cold water and struggling across the fields of blinding snow on the Norwegian archipelago of Svalbard. Clips of Harry, sporting stylish sunglasses and a wisp of stubble, have played better than those of his balding older brother, who was last pictured in faded green overalls showing his grandmother around a Welsh helicopter bay.

"Will's a bit more like Charles, more serious. Harry's a bit more like Di," his popular and glamorous mother, said Katie Steward, a 44-year-old bartender who planned to watch the royal wedding procession on April 29.

She put Harry's charm down to his rebelliousness, but her friend, Emma Dunthorne, a 42-year-old teaching assistant, put it more succinctly.

"Everybody likes a bad boy," she said.

Even those with little interest in the royalty, like 19-year-old student Sasha O'Connor, who was sitting with friends at nearby cafe, said they'd prefer Harry.

"William looks more and more like his father every day," O'Connor said.

It isn't unusual for the younger siblings of royalty to get sexier coverage than their throne-bound relatives. Prince Andrew was always seen as much more of a party-happy playboy than older brother Prince Charles, so much so that he once laboured under the nickname "Randy Andy." Queen Elizabeth II's younger sister, the late Princess Margaret, was a 1950s fashion icon, her easy glamour contrasting with the queen's tasteful-but-conservative style.

Johnston said younger siblings often had it easier because they aren't as completely captive to their royal roles.

"The heir to the throne has to have this grandeur," he said. "Not surprisingly, William has a more distant feel to him than his brother."

But Harry's guy-next-door act has occasionally gotten him booed off the stage. Many stories about the prince still mention his late-night London clubbing, his infamous strip club visit, his marijuana use, and the time he made a front page appearance in the nation's biggest-selling daily, cupping his hands around a TV presenter's breasts.

His biggest faux pas to date, appearing in a Nazi uniform at a costume party, was compounded when, years later, he was caught referring to a Pakistani army cadet using a racial slur.

Yet the Harry who spoke to journalists ahead of his trip Arctic fundraising trek seems a world away from the party prince caught spilling out of exclusive nightspots, his youthful irresponsibility sanded away, perhaps, by his military training and his short-lived deployment to Afghanistan in 2007-2008.

Right now, the only fear for Harry is that he'll embarrass his brother in front of a millions-strong television audience with an indiscreet best man's speech.

Harry has promised as much, telling the BBC television in Norway that his speech at William's wedding might "make him lose some hair."