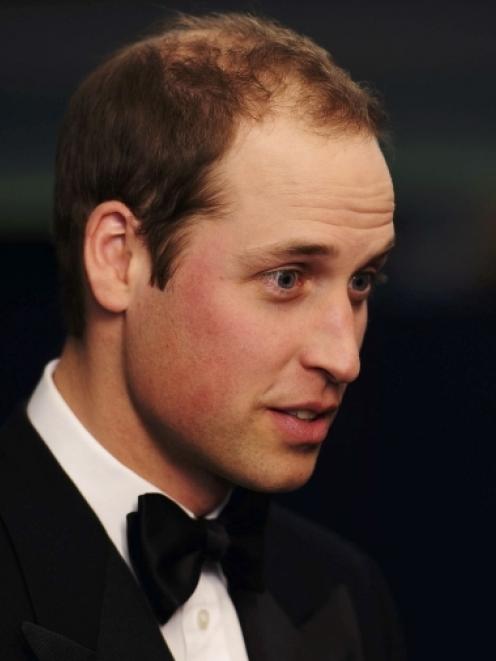 Britain's Prince William attends the UK premiere of War Horse at the Odeon Leicester Square cinema in London January 8, 2012. REUTERS/Ian Gavan/POOL
Britain's Prince William has arrived in the Falkland Islands for a posting as a military search-and-rescue pilot, the defence ministry said, with tension resurging between London and Argentina over sovereignty of the British-ruled territory.

The prince was deployed to the South Atlantic with the Royal Air Force just two months ahead of the 30th anniversary of the 1982 war between Britain and Argentina over the British-ruled islands.

A war of words between the two governments has escalated in recent months, with Argentine President Cristina Fernandez describing Britain as a "crass colonial power in decline".

Argentina's foreign ministry said William, the second in line to the British throne, was arriving in the "uniform of a conquistador" (conqueror).

London, which rejects Buenos Aires's claim over the craggy windswept islands, is sending one of its most sophisticated warships to the Falklands, known as Las Malvinas in Spanish.

Britain's defence ministry said on Thursday it was routine for Prince William to spend time in the Falklands at this stage in his career. The prince, known as Flight Lieutenant Wales in the Royal Air Force, graduated as a search-and-rescue pilot in September 2010, having started his training in Anglesey, Wales.

"(William) has arrived in the Falkland Islands on a routine operational deployment and will shortly take up SAR (search and rescue) duties post a period of briefings and a familiarisation flight," the ministry said in a brief statement.

William, who is married to Catherine Middleton, the Duchess of Cambridge, will not carry out any royal duties during his six weeks on the islands, it added.

Britain has controlled the islands, about 480km off the southern Argentine coast, since 1833.

In 1982, Britain sent a naval force and thousands of troops to reclaim the islands after Argentine forces sent by the country's then-military junta occupied them. About 650 Argentine and 255 British troops died in the 10-week conflict.

Britain refuses to negotiate with Argentina over its claim of sovereignty to the islands. Prime Minister David Cameron said last month Britain was committed to protecting the islands.