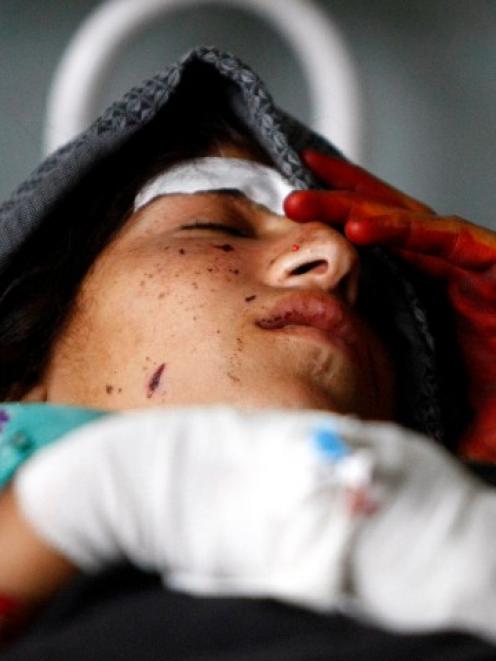 A wounded woman rests at a hospital after NATO air strikes in Laghman province, Afghanistan. REUTERS/Parwiz
Four US troops fighting with the NATO-led alliance have been killed in another suspected "insider" attack in southern Afghanistan, bringing the total number of deaths this weekend caused by Afghans turning on their allies to six.

Four troops were found dead and two wounded when a response team arrived at the scene from a nearby checkpoint, a spokesman for the coalition said. A Pentagon spokesman confirmed that the four dead were Americans.

One of the six members of the Afghan National Police (ANP) operating the observation post with six coalition troops was also found dead, while the other five had disappeared.

"The fighting had stopped by the time the responders arrived," said Major Adam Wojack, a spokesman for the NATO-led coalition.

Sunday's shooting took place in Zabol, a province where US forces are based, according to a local official.

The attack came a day after two British soldiers were shot dead by an Afghan policeman while returning from a patrol in the southerly Helmand province, one of the strongholds of the Taliban-led insurgency.

At least 51 foreign military personnel have been killed in "insider" attacks this year, deaths that have badly strained the coalition's relations with Afghan forces as it moves towards handing security responsibility to them by the end of 2014.

The rise in such attacks has led to the training of new recruits to the Afghan army and police being suspended.

With foreign combat troops withdrawing from the increasingly unpopular and expensive war, the enormous cultural divide still separating Afghans and their allies after 11 years of conflict has become more of a concern than ever.

The NATO-led coalition and its Afghan counterparts have created a special Joint Casualties Assessment Team to investigate every attack.

But in more than half of cases, attackers are either killed or escape and the precise motive never emerges, making it more difficult for the coalition to stem the surge.

On Friday, two US Marines were killed and nine wounded in on attack on Camp Bastion, one of the worst attacks on a NATO-operated base all year.

Six Harrier jets were destroyed and two were significantly damaged in the raid on the camp airfield, carried out by 15 insurgents wearing US Army uniforms, the NATO-led coalition said in a separate statement on Sunday.

Operating in three teams, they succeeded in breaching the perimeter of the heavily fortified base. Britain's Prince Harry was at Camp Bastion at the time of the attack, but was unharmed.

Three refuelling stations were also destroyed and six aircraft hangars were damaged. All but one of the attackers were killed, with the remaining fighter taken into custody by coalition forces.

In a separate incident on Sunday, NATO-led forces arrested a Taliban fighter responsible for killing two US troops when their Kiowa helicopter was downed in eastern Afghanistan, the coalition said in another statement.

Relations between the NATO-led coalition and its Afghan partners have also been strained by civilian casualties.

Despite efforts to limit such deaths, over 200 civilians have been killed by foreign troops in the year so far, according to figures provided by the coalition, around half the level of last year.

NATO-led air strikes in Laghman province on Saturday night killed eight women, according to a local official. The coalition acknowledged up to eight civilians could have died as a result of the bombing, but said a "large number" of insurgents had been killed in the strike.

Villagers said the death toll was higher and expressed outrage at being unable to pick up the bodies because the area had been closed off.