Tears and pride on Gallipoli peninsula 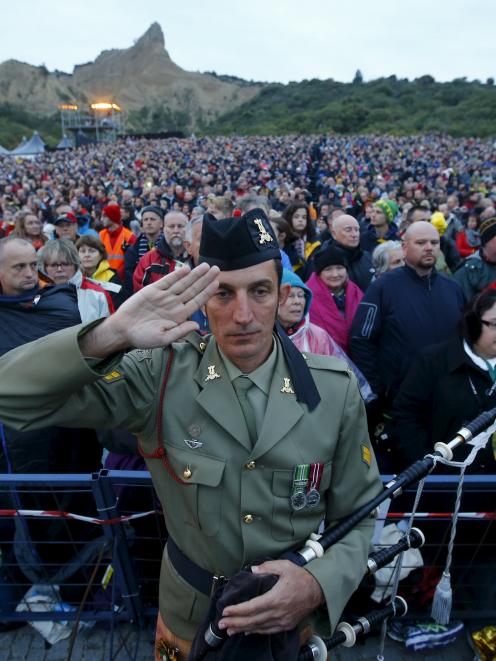 A bagpiper from the Australian army salutes during a dawn ceremony marking the 100th anniversary of the Battle of Gallipoli, at Anzac Cove in Gallipoli. Photo by Reuters.
They fought for us. They died for us.

And as dawn broke over Gallipoli yesterday, light drenching the cove where the Anzacs landed a century ago, they united us as we remembered them.

They were men, boys, fathers, sons, brothers and cobbers - all brave in the face of an enemy they were not prepared for and stood no chance.

Their tenacity and perseverance, gallantry and comradeship helped create who we are today and should never be forgotten.

To use the words of Prime Minister John Key - along with those men, there are also places on the Gallipoli peninsula that should never be forgotten. Chunuk Bair, sitting atop the scrub-covered hills, is the most significant for New Zealanders.

It is where thousands of Kiwis file each year at Gallipoli, 6km up a steep and winding road, to pay tribute their countrymen. It is a pilgrimage, a nod to those who walked, trenched, crawled and battled their way up the same path 100 years ago.

"Each country remembers where their soldiers fought, and where they fell. Places where extraordinary bravery was shown, in unspeakable conditions. For New Zealanders, nowhere in Gallipoli is more special than here on Chunuk Bair.

"It was not the scene of a great triumph. But it was the closest the Allied forces came to making a breakthrough in the whole Gallipoli campaign. And it was led by a few hundred Kiwis, 10,000 miles from home.

"We are the descendants and countrymen of the New Zealanders who fought and died on this hilltop. We do not come merely as sightseers. We come to feel closer to those who came here before us, 100 years ago.

Mr Key, speaking at the Chunuk Bair centenary service yesterday said there is no way to sanitise what took place here in Gallipoli and nor should we try.

"The sacrifice of so many men from such a small country as New Zealand was harrowing… No more could have been asked of them then than what they gave."

Earlier yesterday the Dawn Service was held near another hallowed ground - Anzac Cove. As a pale violet light began to spread upward into the navy of the night and stretch across the ridges and gullies of Gallipoli a roll of honour began to play, beaming the names of some of the fallen onto big screens.

Beneath the names, their epitaphs a solemn reminder of the lost.

"A life of promise, closed."

"He died fighting like a tiger and with defiance in his face."

"He died doing his duty. That is all."

As the hours turned to minutes before the centenary began, the sound of birds awakening chimed melodically against the rustle of sleeping bags and tin foil blankets.

The crowd was silent but for the odd cough, the click of a camera.

Then, as aqua-hued lights strobed over the Aegean Sea and warships glided towards the Dardanelles, it began.

The Prince of Wales and Harry were already seated, whisked discretely into the Anzac Commemorative Site alongside other VIPs and dignitaries including Mr Key and wife Bronagh.

We had been told earlier there would be no pomp and circumstance, that this was not about the Royal pair, it was about the Anzacs and the Anzacs alone.

"On this beach, on this day at this exact hour exactly 100 years ago the first Anzac troops came ashore. Instead of the open spaces that had been described to them, they landed here with steep hills rising in front of this narrow beach. And in those hills, Ottoman Turkish soldiers were already positioned and ready to defend this land," Mr Key said solemnly.

"We New Zealanders rarely think of ourselves as anyone's enemy, but that's exactly how those soldiers would have seen the Anzac troops."

Mr Key's voice did not waiver as he saluted the Anzacs for their bravery, and the impact their actions are still having on New Zealanders 100 years later.

"Their bravery and unity would help to forge the Anzac bond and reputation that endures to this day. I salute that."

The name Gallipoli was evocative. To Kiwis, it is not just the stretch of beach where the Anzacs landed a century ago, nor the precarious cliffs and rugged valleys.

Said Mr Key: "It means the names and stories of more than 2700 New Zealanders who died here, and the parents, wives and families who grieved for them, and the friends who said goodbye and didn't know it was forever.

He told the crowd of 10,500 standing shoulder to shoulder on the Anzac battlefield that Gallipoli symbolised the best characteristics of New Zealand, but also the pity of war.

Mr Key's last words were poignant and even while such a speech was expected, it visibly moved the crowd.

"Usually at these commemorations we conclude by saying 'Lest We Forget'. But today… I will not say Lest We Forget. Because after one hundred years we can say, on this day, April 25 2015, 'We Remember'."

Australian Defence Force Chief Air Chief Marshal Mark Binskin painted a picture of the Anzacs in his address that conjured images of their fateful landing. Facing the cliffs they charged up and his back to the gleaming seas they approached on, he offered an account that stirred emotion and vivid imagery.

"We gather here at this time, on this now quiet beach, to remember and to honour those who came from across the world to take their place on the battle-field. One hundred years ago today, the quiet stillness of dawn and the gentle sound of the waves on this beach gave way to the flash and roar of gunfire over the painful cries of the wounded. For so many, the rising sun that day would be their last.

"Each man who landed on these shores harboured his own fears and apprehensions. They worried how they would perform when they confronted the enemy and hoped that, when the time came, they would not let their mates down."

As he spoke, a ripple of hands swiping tears passed through the crowd. The silence deepened and the gravity of the failed landings took hold.

"It is our promise to remember them always and it is right that we do so at this time, on this day, in this place. This is where the Anzac legend was born at great cost. Here, the reality of war was revealed. Here, so many died and dreams died with them. Here, they lie in sacred soil. Here, we honour their spirit, the spirit of Anzac which lives among us. Here, we will remember them."His Royal Highness The Prince of Wales' offering was also poignant. At one point, he paused - possibly to overcome a wave of emotion that took hold of even the staunchest of attendees.

"When the Anzacs left this place, they were tormented by the thought of leaving their comrades behind, that their suffering and loss would be forgotten, that their graves would lie untended." He said.

"Here today, we remember… all those who served and suffered here."

In the end, many words were said, but none will ever be great enough to pay dues to the Anzacs. Those men and the boys who gave up their future and for many, their lives to protect the freedoms we enjoy today.

By Anna Leask of The New Zealand Herald at Gallipoli