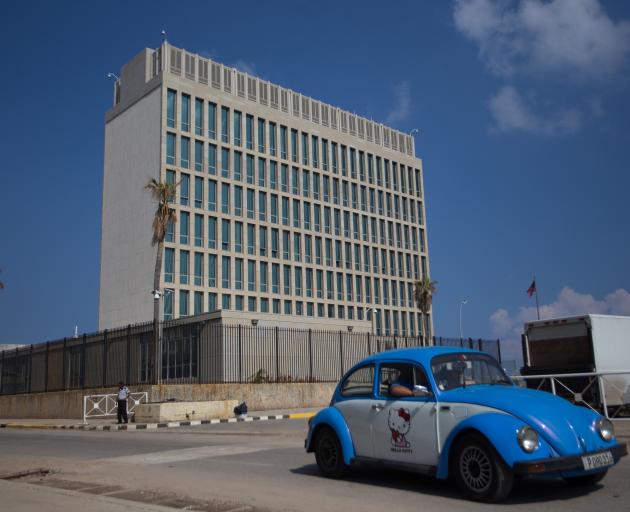 The US Embassy in Havana, Cuba, has been subject to a string of mysterious 'sonic attacks'. Photo:Getty Images
The United States on Friday cut its diplomatic presence in Cuba by more than half and warned U.S. citizens not to visit because of mysterious "attacks" that have caused hearing loss, dizziness and fatigue in U.S. embassy personnel.

The U.S. embassy in Havana will halt regular visa operations for Cubans seeking to visit the United States and offer only emergency services to U.S. citizens, steps that may further erode the U.S.-Cuban rapprochement begun by former President Barack Obama.

The partial evacuation, while depicted as a safety measure, sends a message of U.S. displeasure over Cuba’s handling of the matter and delivers another blow to Obama's policies of engagement with Cold War foe Cuba.

Cuba's Foreign Ministry chief for U.S. Affairs Josefina Vidal said: "We consider the decision announced today by the U.S. government through the State Department is hasty and will affect bilateral relations."

Mr Vidal, in a briefing on state-run television, added Cuba was still keen to continue active cooperation with U.S. authorities to clarify what happened.

"Until the government of Cuba can ensure the safety of our diplomats in Cuba, our embassy will be reduced to emergency personnel in order to minimize the number of diplomats at risk of exposure to harm," Secretary of State Rex Tillerson said in a statement.

The Cuban government has denied any role and is investigating.

A senior State Department official told reporters neither the U.S. nor Cuban governments had been able to identify who was responsible but stressed that "the government of Cuba is responsible for taking all appropriate steps to prevent attacks on our diplomatic personnel in Cuba."

In a travel warning, the State Department bluntly said "because our personnel's safety is at risk, and we are unable to identify the source of the attacks, we believe U.S. citizens may also be at risk and warn them not to travel to Cuba."

The State Department said the attacks on U.S. embassy personnel had occurred at "U.S. diplomatic residences and hotels frequented by U.S. citizens."

Diana Rodriguez, 52, who sells handicrafts in Old Havana, said she had a visa appointment in October so she could visit family who live in Florida.

"I won't ever go there now," she said furiously. "This is a really strong blow that affects regular Cubans on the street. It's just unheard of. What is going on with this man? Neither Bush nor his father were such sons of b*****s."

Mr Trump in June vowed to partially roll back the detente with Cuba agreed by his Democratic predecessor, Mr Obama, and called the Cuban government "corrupt and destabilizing" in his address to the United Nations General Assembly this month.

Bert Hoffman, a Latin American expert at the German Institute of Global and Area Studies in Hamburg, Germany, suggested Washington's decision may have been motivated by Trump's desire to pursue a tougher policy with the Communist Party-run country.

The analyst said the "de facto visa restrictions" resulting from the suspension of normal visa operations could call into question the U.S.-Cuban migration accord hammered out in the 1990s under which the United States grants 20,000 visas per year in return for Cuba preventing illegal emigration.

Engage Cuba, a Washingon-based lobbying group, said the decision was "puzzling" given that American travelers had not been targeted. It said halting the visa process in Cuba and discouraging Americans from going there "will divide families and harm Cuba's burgeoning private sector, civil society groups and efforts to improve human rights on the island."

U.S. lawmakers took positions on the issue that appeared to reflect their wider perspective on engagement with Havana.

Senator Patrick Leahy, a Democrat who favors normalization, suggested the attacks may be an attempt to undermine this.

"Whoever is doing this obviously is trying to disrupt the normalization process between the United States and Cuba. Someone or some government is trying to reverse that process," Leahy said in a statement. "We must do all we can to solve this mystery so that our embassy personnel can safely return as quickly as possible."

Marco Rubio‏, a Florida Republican and frequent critic of the Cuban government, called for harsher measures.

"Until those responsible for these attacks are brought to justice, the U.S. should immediately expel an equal number of Cuban operatives, downgrade the U.S. embassy in Havana to an interests section, and consider re-listing Cuba as a state sponsor of terrorism," Mr Rubio said in a statement.

"The warning illustrates the administration's political agenda and is totally disproportionate to any real safety threat to American travelers. Cuba remains one of the safest countries to visit in the world for American citizens."

American Airlines spokesman Matt Miller said the airline was monitoring the situation but no changes had been made to the carrier's current nine daily flights to Cuba, nor has the travel warning affected American's request to operate 10 additional weekly flights to Havana.

Airbnb said its operations in Cuba would continue.