US in damage control after troops pose with corpses 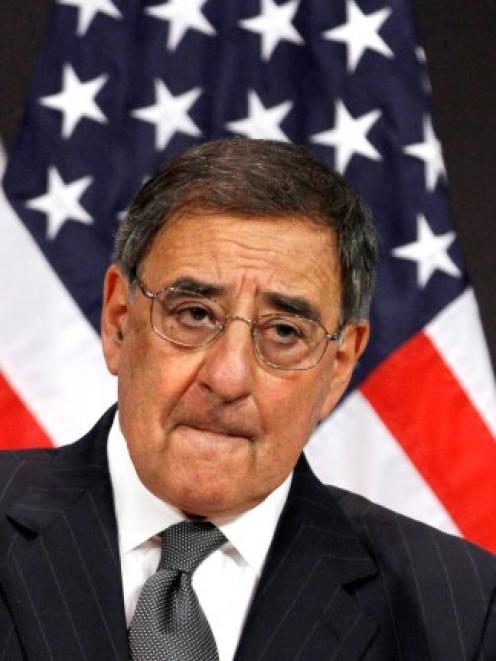 US Defense Secretary Leon Panetta listens to a question about photographs that were published in the Los Angeles Times of soldiers posing with dead insurgents during a news conference at NATO headquarters in Brussels, Belgium. REUTERS/Jacquelyn Martin/Pool
American troops are seen posing with the maimed bodies of suspected Afghan insurgents in photos published by a US newspaper in an incident that threatened to further fray US relations with Afghanistan's government and prompted the Pentagon chief to issue an apology.

US officials quickly condemned the behavior seen in the pictures published by the Los Angeles Times. US Defense Secretary Leon Panetta also said he regretted the decision of the newspaper to publish some of the photos, which he said might trigger retaliatory violence against foreign soldiers stationed in Afghanistan.

In one of the pictures, a US paratrooper posed next to an unofficial patch placed beside a body that read "Zombie Hunter," while in another photo soldiers posed with Afghan police holding the severed legs of an insurgent bomber. Two soldiers in another photo held a dead insurgent's hand with the middle finger raised.

During a meeting of NATO allies in Brussels, Panetta apologised "on behalf of the Department of Defense and the US government" and said "that behaviour is unacceptable."

White House spokesman Jay Carney told reporters aboard Air Force One as President Barack Obama flew to Ohio for an economic speech, "The conduct depicted in those photos is reprehensible."

Carney said Obama was briefed on the matter but he did not know whether the president had seen the photos, which were taken in 2010 and published by the Los Angeles Times after the newspaper received them from a soldier.

The incident dealt another blow to already tense US and NATO ties with Afghanistan.

"That behavior that was depicted in those photos absolutely violates both our regulations and more importantly our core values," Panetta told a news conference at the NATO summit in Brussels, adding that the pictures already were under investigation.

"I know that war is ugly and it's violent and I know that young people sometimes caught up in the moment make some very foolish decisions," he added. "I'm not excusing that behavior, but neither do I want these images to bring further injury to our people and to our relationship with the Afghan people."

The photos are likely to stir up more anti-Western sentiment in Afghanistan as NATO combat troops look to exit the country in 2014 and strengthen fragile security in the country.

Such incidents have complicated US efforts to negotiate a strategic partnership agreement to define its presence once most foreign combat troops pull out by the end of 2014.

Pentagon Press Secretary George Little said US forces in Afghanistan were taking security measures to protect against a possible backlash over the photographs, adding that the images could be "used by the enemy to incite violence."

The newspaper said the photographs were of suicide bombers and insurgents, but Reuters was unable to independently confirm whether they were insurgents or ordinary Afghans caught up in the fighting.

The US Army said it launched an investigation into the 18 photographs taken by members of the 82nd Airborne Division as soon as The Times showed them to military authorities, who had appealed for the newspaper not to publish them.

"We do not condone service members engaging in such behavior or possessing related materials," said US Army spokesman George Wright. "This matter remains under investigation by the unit."

The Times said it obtained the pictures, taken in 2010, from a member of the unit who demanded anonymity and was concerned that the photographs were evidence of a breakdown in leadership and discipline that threatened the security of the troops.

"The actions of the individuals photographed do not represent the policies of International Security Assistance Force or the US Army," the commander of international forces in Afghanistan, US General John Allen, said in a statement.

"I am afraid it is another shocking example of misbehavior, bad behavior, by a very few rogue troop elements. Leon Panetta, the US defense secretary, addressed this issue in the meeting today and apologized for it," British Defense Minister Philipe Hammond said.

The publication of the photographs on The Times website comes at a sensitive time in US-Afghan relations, following a series of incidents that have provoked Afghan anger.

A video released in January showed four US Marines urinating on Afghan insurgent corpses. The burning of copies of the Koran at a major NATO airbase also triggered a week of riots that left 30 dead and led to the deaths of six Americans.

And in March a US Army sergeant went on a nighttime shooting rampage in two southern Afghan villages, killing 17 civilians and prompting Afghan President Hamid Karzai to demand foreign soldiers confine themselves to major bases.

Taliban insurgents launched suicide attacks in Kabul and three other provinces during the weekend, claiming the assault was launched in retaliation for all three incidents.

The Times said the 82nd Airborne Division soldiers had been at a police station in Afghanistan's Zabol province in February 2010, and revisited several months later. The pictures were taken on both occasions. The Times defended the distribution of the photos.

"After careful consideration, we decided that publishing a small but representative selection of the photos would fulfil our obligation to readers to report vigorously and impartially on all aspects of the American mission in Afghanistan," Times Editor Davan Maharaj said in the newspaper's article.

But Navy Captain John Kirby, a Pentagon spokesman, noted that the photographs were two years old and bore no relevance to current security or leadership issues.

"The only thing that made the story 'news' is the graphic nature of the imagery," he said. "Take that away, and you've got little of substance."

Kirby said the Pentagon asked The Times not to publish the photographs because "we believe there is a real potential for backlash."

"We don't make such pleas often or without cause," he said. "This isn't about the military trying to avoid embarrassment. We facilitate coverage of this war openly, honestly and with transparency every day. ... This is about trying to prevent needless bloodshed from photos more than two years old."