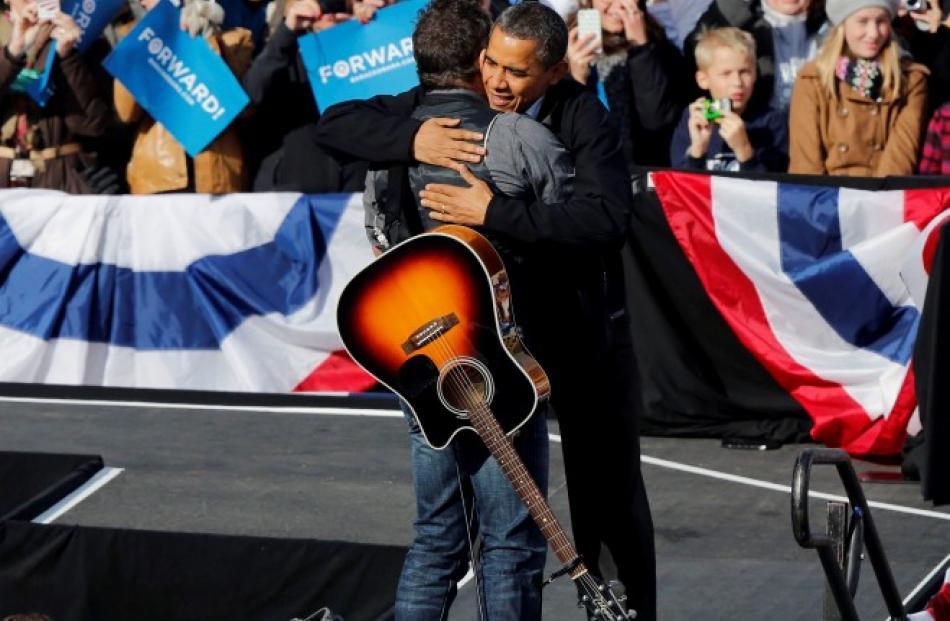 US President Barack Obama (R) hugs singer Bruce Springsteen as he is introduced before he speaks at an event in Madison, Wisconsin on his final day of campaigning before the presidential election. REUTERS/Larry Downing

President Barack Obama and Republican challenger Mitt Romney have made their final urgent pleas to voters in a closing sprint through vital battleground states that will determine who wins their agonizingly close race for the White House.

Both candidates sought to whip up a strong turnout from their supporters and to sway independent voters to their side in the last hours of a race that polls showed was deadlocked nationally. Obama had a slight lead in the eight or nine battleground states that will tell the tale on Election Day on Tuesday.

The Democratic incumbent, appearing in Madison, Wisconsin, drew a large crowd that was warmed up by Bruce Springsteen.

"Wisconsin, tomorrow you have a choice to make," he said. "It is a choice between two different visions for America."

On the defensive throughout the year for presiding over persistently high unemployment, Obama said the choice was between the Republicans' "top-down policies that crashed our economy" and his own approach to moving the country forward.

Romney was in Lynchburg, Virginia, telling voters: "One final push is going to get us there.

Obama was making stops in three swing states and Romney was hitting four. Their goal was to piece together the 270 Electoral College votes needed for victory in the state-by-state battle for the presidency.

All eyes were on the Midwestern state of Ohio, whose 18 electoral votes could be decisive. After voting early in his home state of Massachusetts, Romney was considering a last-second visit to Ohio on Tuesday to try to drive turnout, aides said.

The election's outcome will impact a variety of domestic and foreign policy issues, from the looming "fiscal cliff" of spending cuts and tax increases that could kick in at the end of the year to questions about how to handle illegal immigration or Iran's nuclear ambitions.

The balance of power in Congress also will be at stake on Tuesday, with Obama's Democrats now expected to narrowly hold their Senate majority and Romney's Republicans favored to retain control of the House of Representatives.

In a race where the two candidates and their party allies raised a combined $2 billion, the most in U.S. history, both sides have pounded the heavily contested battleground states with an unprecedented barrage of ads.

The close margins in state and national polls suggested the possibility of a cliffhanger that could be decided by which side has the best turnout operation and gets its voters to the polls.

In the final days, both Obama and Romney focused on firing up core supporters and wooing the last few undecided voters in battleground states.

Romney reached out to dissatisfied Obama supporters from 2008, calling himself the candidate of change and ridiculing Obama's failure to live up to his campaign promises. "He promised to do so very much but frankly he fell so very short," Romney said at a rally in Cleveland on Sunday.

Obama, citing improving economic reports on the pace of hiring, argued in the final stretch that he has made progress in turning around the economy but needed a second White House term to finish the job. "This is a choice between two different versions of America," Obama said in Cincinnati.

Obama will close his campaign on Monday with a final blitz across Wisconsin, Ohio and Iowa - three Midwestern states that, barring surprises elsewhere, would be enough to get him more than the 270 electoral votes needed for victory.

Polls show Obama has slim advantages in all three. His final stop on Monday night will be in Iowa, the state that propelled him to the White House in 2008 with a victory in its first-in-the nation caucus.

Romney will visit his must-win states of Florida and Virginia - where polls show he is slightly ahead or tied - along with Ohio before concluding in New Hampshire, where he officially started his presidential run last year.

The only state scheduled to get a visit on Monday from both candidates is Ohio, the most critical of the remaining battlegrounds - particularly for Romney. He has few paths to victory if he cannot win in Ohio, where Obama has kept a small but steady lead in polls for months.

One in every eight jobs in Ohio is tied to car manufacturing and Obama has been buoyed in the state by his support for a federal bailout of the auto industry. Ohio also has a strong state economy with an unemployment rate lower than the 7.9 percent national rate.

That has undercut Romney's frequent criticism of Obama's economic leadership, which has focused on the persistently high jobless rate and what Romney calls Obama's big-spending efforts to expand government power.

Romney, who would be the first Mormon president, has centered his campaign pitch on his own experience as a business leader at a private equity fund and said it made him uniquely suited to create jobs.

Obama's campaign fired back with ads criticizing Romney's experience and portraying the multimillionaire as out of touch with everyday Americans.