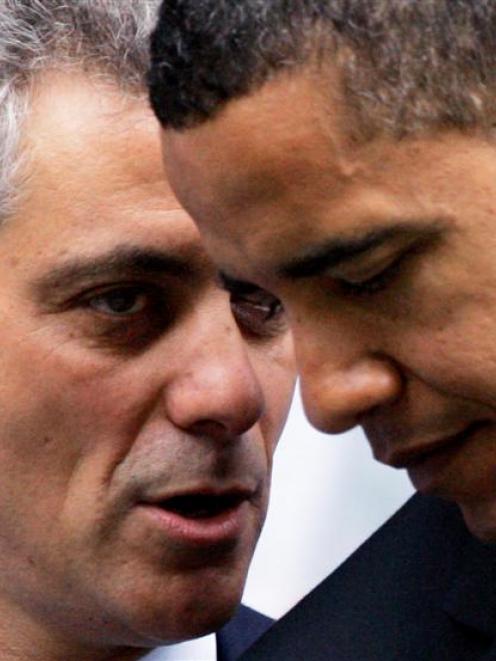 Several Democrats confirmed that Emanuel had been offered the job. While it was not clear he had accepted, a rejection would amount to an unlikely public snub of the new president-elect within hours of an electoral college landslide.

With hundreds of jobs to fill and only 10 weeks until Inauguration Day, Obama and his transition team confronted a formidable task complicated by his anti-lobbyist campaign rhetoric.

The official campaign website said no political appointees would be permitted to work on "regulations or contracts directly and substantially related to their prior employer for two years. And no political appointee will be able to lobby the executive branch after leaving government service during the remainder of the administration."

But almost exactly one year ago, on Nov. 3, 2007, candidate Obama went considerably further than that while campaigning in South Carolina. "I don't take a dime of their money, and when I am president, they won't find a job in my White House," he said of lobbyists at the time.

Because they often have prior experience in government or politics, lobbyists figure as potential appointees for presidents of both parties.

On the morning after making history, the man elected the first black president had breakfast with his wife and two daughters at their Chicago home, went to a nearby gym and visited his downtown offices.

Aides said he planned no public appearances until later in the week, when he has promised to hold a news conference.

In offering the post of White House chief of staff to Emanuel, Obama turned to a fellow Chicago politician with a far different style from his own, a man known for his bluntness as well as his single-minded determination.

Emanuel was a political and policy aide in Bill Clinton's White House. Leaving that, he turned to investment banking, then won a Chicago-area House seat six years ago. In Congress, he moved quickly into the leadership.

As chairman of the Democratic campaign committee in 2006, he played an instrumental role in restoring his party to power after 12 years in the minority.

Emanuel maintained neutrality during the long primary battle between Obama and Sen. Hillary Rodham Clinton, not surprising given his long-standing ties to the former first lady and his Illinois connections with Obama.

The day after the election there already was jockeying for Cabinet appointments.

Several Democrats said Sen. John Kerry of Massachusetts, who won a new six-year term on Tuesday, was angling for secretary of state. They spoke on condition of anonymity, saying they were not authorized to discuss any private conversations.

Kerry's spokeswoman, Brigid O'Rourke, disputed the reports. "It's not true. It's ridiculous," she said in an interview.

Announcement of the transition team came in a written statement from the Obama camp.

The group is headed by John Podesta, who served as chief of staff under former President Clinton; Pete Rouse, who has been Obama's chief of staff in the Senate, and Valerie Jarrett, a friend of the president-elect and campaign adviser.

Several Democrats described a sprawling operation well under way. Officials had kept deliberations under wraps to avoid the appearance of overconfidence in the weeks leading to Tuesday's election.

They said the group was stocked with longtime associates of Obama, as well as veterans of Clinton's White House.

Quite apart from transition issues, Obama's status as an incumbent member of Congress presents issues unseen since 1960, when John F. Kennedy moved from the Senate to the White House.

The Senate is scheduled to hold a postelection session in two weeks, and Speaker Nancy Pelosi held a news conference on Wednesday to reinforce her call for quick action on a bill to stimulate the economy.

That places Obama in uncharted territory - a president-elect, presumably first among equals among congressional Democrats. Yet his and their ability to enact legislation depends almost entirely until Inauguration Day on President Bush's willingness to sign it.

Obama's running mate, Sen. Joe Biden, was elected to a new six-year term from Delaware on Tuesday and he must resign before he can be sworn in as vice president. Democrats are certain to hold his seat, following Jack Markell's election as governor.

There has been intense speculation that Biden's son, Beau Biden, is interested in ascending to the seat. But he is serving a one-year stint in Iraq as a member of the National Guard. In the interim, outgoing Gov. Ruth Ann Minner is seen among many Democrats as a likely appointee to hold the office until an election in 2010.

Obama also must resign his Senate seat before he can be sworn in as the 44th president. Democratic Illinois Gov. Rod Blagojevich will pick a replacement.