Trump appeared headed toward a stunning upset of Clinton in a bitter and divisive White House race after capturing Ohio, Florida and other big states, edging closer to slamming the door shut on her quest to become the first woman president.

With investors worried a Trump victory could cause economic and global uncertainty, investors fled risky assets such as stocks. In overnight trading, S&P 500 index futures fell 5% to hit their so-called limit down levels, indicating they would not be permitted to trade any lower until day-side trading resumed on Wednesday morning.

Trump's surprise wins pushed him closer to the 270 Electoral College votes needed to win the state-by-state fight for the White House, and he still held slight leads in Pennsylvania, Michigan and Arizona as vote counting moved into the wee hours of Wednesday. 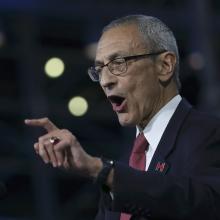 Clinton campaign chairman John Podesta told supporters at Clinton's election rally in New York to go home. "Several states are too close to call so we're not going to have anything more to say tonight," he said.

Clinton still had a narrow path to the White House, although she would have to sweep every remaining battleground state.

Shortly after Fox called Wisconsin for Trump, supporters at his election evening rally in New York began to chant "lock her up" - a common refrain on the campaign trail for the former US secretary of state repeatedly dubbed "Crooked Hillary" by the volatile Trump.

A packed crowd in the lobby of Trump's new hotel in Washington D.C. chanted "lock her up" and "USA, USA, USA" as state after state was called for Trump.

Donald Trump and Hillary Clinton are seeking to become the 45th president of the United States and the successor to Democrat Barack Obama. Photo: Reuters

Republicans also were projected to maintain control of the U.S. House of Representatives, and appeared to be heading toward keeping their majority in the U.S. Senate.

If Trump wins the White House, he would have a greater chance of enacting his agenda with a Republican-led Congress.

As the evening wore on, Clinton (69) acknowledged the unexpectedly close results given her lead in opinion polls going into election day.

"This team has so much to be proud of. Whatever happens tonight, thank you for everything," Clinton said on Twitter.

A wealthy real-estate developer and former reality TV host, the 70-year-old Trump rode a wave of anger toward Washington insiders to challenge Clinton, whose gold-plated establishment resume includes stints as a first lady, US senator and secretary of state.

Both candidates had historically low popularity ratings, although Trump's were worse than Clinton's, in an election that many voters characterised as a choice between two unpleasant alternatives.

Before Tuesday's voting, Clinton led Trump, 44% to 39% in the last Reuters/Ipsos national tracking poll. A Reuters/Ipsos States of the Nation poll gave her a 90% chance of defeating Trump and becoming the first woman elected US president.

A Reuters/Ipsos national Election Day poll offered some clues to Clinton's weakness. It found she underperformed expectations with women, winning their vote by only about 7%, similar to President Barack Obama when he won re-election in 2012.

And while she won Hispanics, black and millennial voters, Clinton did not win those groups by greater margins than Obama did in 2012. Younger blacks did not support Clinton like they did Obama, as she won eight of 10 black voters between the ages of 35 and 54. Obama won almost 100 percent of those voters in 2012.

As Trump's chances of winning the presidency increased, Mexico's peso plunged to its lowest-ever levels. Concerns of a Trump victory have weighed heavily on the peso for months because of his threats to rip up a free trade agreement with Mexico and tax money sent home by migrants to pay to build a wall on the southern U.S. border.

In a presidential campaign that focused more on the character of the candidates than on policy, Clinton and Trump accused each other of being fundamentally unfit to lead the country.

Trump entered the race 17 months ago and defeated a field of some 16 rival Republican candidates in the primary contests to win his party's presidential nomination.

He survived a series of seemingly crippling blows, many of them self-inflicted, including the emergence in October of a 2005 video in which he boasted about making unwanted sexual advances on women. He apologised but within days, several women emerged to say he had groped them, allegations he denied.

He was judged the loser of all three presidential debates with Clinton and she led him by varying margins for months in opinion polls.

Trump won avid support among a core base of white non-college educated workers with his promise to be the "greatest jobs president that God ever created." He has vowed to impose a 35% tariff on goods exported to the United States by US companies that went abroad.

His unpredictable nature, frequent insults and unorthodox proposals led to campaign feuds with a long list of people, including Muslims, the disabled, Republican US Senator John McCain, Fox News anchor Megyn Kelly, the family of a slain Muslim-American soldier, a Miss Universe winner and a federal judge of Mexican heritage.

Here are the moments you'll always remember (and the ones you wish you could forget) from the 2016 US election https://t.co/wZra5rx6iL pic.twitter.com/5mWzXukffB— CNN (@CNN) November 8, 2016