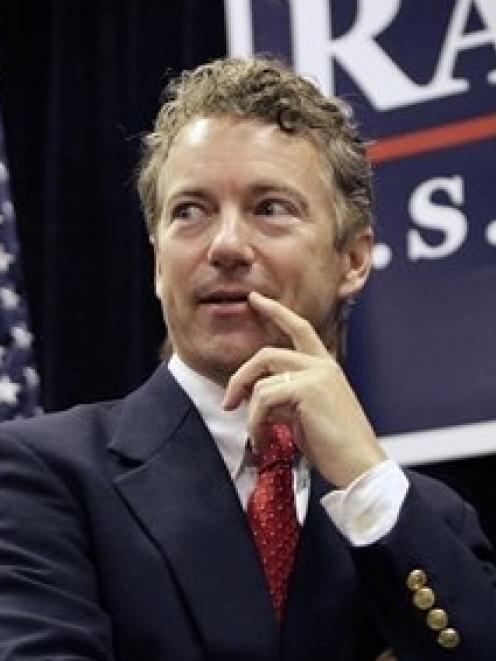 Republican US Senate candidate Rand Paul. Photo by Ed Reinke, File/AP.
Anti-tax crusader Rand Paul's election victory has given the tea party a flag bearer to send to the Senate and hope that more like-minded Washington outsiders would be elected to Congress.

The first-time candidate and champion of small government upended the Kentucky Senate race by trouncing the Republican establishment's hand-picked candidate in the May primary and then winning decisively against Democratic state Attorney General Jack Conway on Tuesday.

Candidates with tea party support were on the ballot in more than 70 House districts, seven races for Senate and three for governor. Paul, an ophthalmologist and son of libertarian hero Rep. Ron Paul of Texas, was elected to a seat currently held by a Republican, so the win did not contribute to GOP hopes for gains in the Senate. He will replace Republican Sen. Jim Bunning, who is retiring.

The grassroots tea party movement, without any official platform or national organization, drew a committed following. About four in 10 voters considered themselves tea party supporters, according to an Associated Press analysis of preliminary exit poll results and pre-election polls. It was an impressive feat for a movement that didn't even exist in the last congressional election, two years ago.

But the tea party also was a polarizing force among some voters - about a quarter of voters said they considered their vote a message of support for the tea party and nearly as many said their vote was meant to signal opposition to the movement. About half said the tea party wasn't a factor.

Many tea party candidates were running for the first time but still able to defeat opponents with Republican establishment backing in the primaries, including Senate GOP nominees Paul, Sharron Angle in Nevada and Christine O'Donnell in Delaware.

The movement's candidates had no unified agenda, but often pushed for a balanced budget, elimination of the federal debt, repeal of the health care law and strict interpretation of the Constitution.

Politically, tea partiers vowed to turn the Republican Party toward conservatism. Some Republicans warned the movement could give Democrats an opportunity for electoral victories by running too far to the right. In some cases - such as Senate races in Florida and Alaska - tea party candidates sparked a three-way race.

Tea party candidates weren't always easy to identify since the movement is a network of loosely connected community groups - not an established political party with official nominees. Even within the tea party there often was disagreement among rival groups about the legitimacy of candidates claiming tea party credentials.

In identifying candidates, The Associated Press assessed factors including a candidate's history with the movement, the involvement of local leaders and activists in a campaign, endorsements or support from tea party-affiliated groups and whether a candidate is running on a platform that dovetails with the movement's agenda.