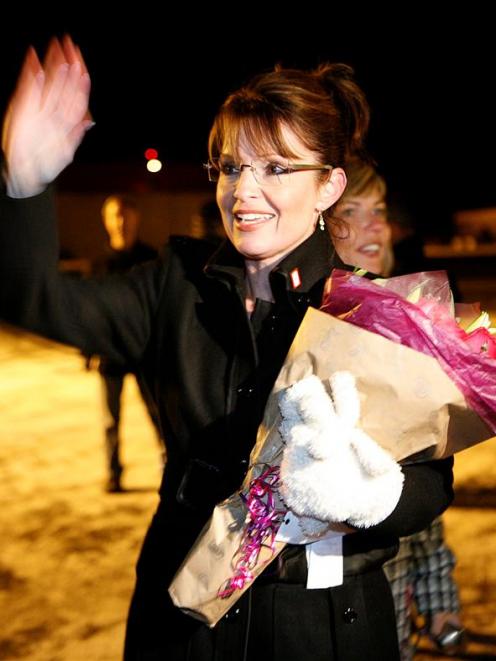 Alaska Gov. Sarah Palin greets supporters after returning to Anchorage, Alaska, on Wednesday Nov. 5, 2008. Photo Al Grillo/AP.
Gov. Sarah Palin, the former Republican vice presidential candidate, hadn't been back home in Alaska for a full day and her staff had begun fielding requests for post-election interviews, including from Barbara Walters, Oprah Winfrey, Larry King and others.

Palin had been expected at her office in Anchorage but later notified her staff that she wouldn't show up after all. She remained at her home in Wasilla, located 64 kilometres to the north, but was expected in her office on Friday, spokesman Bill McAllister said.

"The intensity of all the interest is amazing. Everyone wants to talk to her," he said.

"I think she's been working from home," McAllister said. "Maybe she just liked the idea of spending a whole day at home. It could be the first time she woke up in her own bed and spent the night in her own bed on the same day since late August."

Aides to McCain and Palin, meanwhile, responded to reports of tension between the two sides over the Republican Party's purchase of more than $US150,000 ($NZ257,334) worth of clothing for Palin and her family, and accusations that Palin was ill-prepared for her role.

"It's hard to believe these people worked for John McCain. They obviously have no loyalty to John McCain and no loyalty to his running mate," said Scheunemann, who prepared Palin for the vice presidential debate.

"I've worked in Washington for over 20 years. I have seen literally dozens of politicians, and Sarah Palin is as smart, tough and focused as any politician I've ever seen. I'm proud of the time I was able to spend with her," he said.

Meg Stapleton, a campaign spokeswoman for Palin, said the accusations were unfortunate.

"We have the highest regards for Sen. John McCain," she said in an e-mailed statement. "Gov. Palin was honoured to be chosen as McCain's running mate."

Palin returned to Alaska late Wednesday night, her final flight in the McCain-Palin campaign plane. Dozens of supporters greeted her with chants of "2012! 2012!" as she walked off the airplane - encouragement for her to run for president in four years.

Asked by reporters if she might run, Palin said: "We'll see what happens then."

The governor said she hoped to work with President-elect Barack Obama on energy policy.

She returned home after spending Tuesday night in Phoenix, where she watched election returns with McCain.