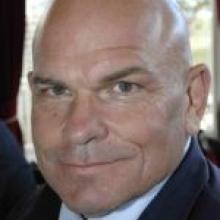 Rodney Hide
For the several hundreds of thousands of voters of conservative mind, Rodney Hide has a message. If they think they can afford to watch Act New Zealand go down the gurgler, they should think again.

Mr Hide argues the interests of the centre-right are best served by ensuring Act remains a parliamentary force - and not just to get National across the line in November's election.

Act's leader is urging centre-right voters to lift their sights beyond election day and ask themselves what kind of re-elected National-led Government they want.

Mr Hide's assumption is most of them do not want one dependent solely on the Maori Party for survival.

Ideally, Mr Hide argues, those voters should ensure there are sufficient Act MPs to vote down combined National Party-Maori Party measures, such as the current Bill on ownership rights to the foreshore and seabed.

He clearly sees the "compelling logic" of what he is saying as resuscitating Act's brand, which was the prime victim of the dreadful carnage the party inflicted on itself last year.

The trick is to get the message reduced to sound-bite proportions.

Its performance in the Botany by-election was disappointing.

Act's annual conference this weekend provides a further opportunity to penetrate the cone of silence that voters have donned to shut out what Act might be saying.

As it is, Mr Hide has not come up with good examples to back his argument. National would likely have redrafted the foreshore and ETS measures to secure Labour's backing, thereby passing law that was even less to Act's taste.

The other problem with Mr Hide's logic is that many voters will smell a rat - that giving Act more leverage will only see that party try to foist its more extreme policy prescription on to National.

Mr Hide and Sir Roger Douglas are quite open about that, however. They believe there is a significant and growing chunk of voters concerned about New Zealand falling ever further behind comparable economies.

They believe this niche is receptive to Act's policy of lower taxes allied with a severe paring back of government spending.

The trouble is, such an agenda is anathema to many of those receptive to Act's campaign on the foreshore and seabed.

Unlike the Greens, who sit happily to Labour's left, Act has been far less confident that there are votes to National's right to sustain itself long-term.

The party has consequently made panic-filled excursions in search of populist bandwagons.

Having ridden them at times to excess - but with little evident pay-off - the party has then been racked with guilt and, increasingly, recrimination over its failure to stick to its principles.

Its campaign against the current foreshore and seabed legislation is a case in point. Act supposedly sees itself as the guardian of property rights and, therefore, the right of Maori to seek redress in the courts.

Act has instead increasingly looked to be only concerned with protecting perceived Pakeha rights that might be threatened by the granting of customary title to Maori.

Such confusion of principle and populism was at the core of last year's ructions within the party. However, anyone expecting those tensions to resurface this weekend will be almost certainly be disappointed.

The "almost" is there for a reason, though.

There will be some apprehension on Mr Hide's part about what dumped deputy leader Heather Roy might say during her five-minute speaking slot.

She has delivered challenging speeches about what Act needs to do to at the past two conferences. Why would someone who has suffered demotion and does not mince her words pull her head in now?

Unlike Ms Roy, however, most of those unhappy with Act's direction under Mr Hide's leadership have either jumped ship to other political vehicles, such as the yet-to-be-properly-launched Reform Party, washed their hands of Act and political activism or been expelled.

Apart from the need for election-year decorum, there is another reason why the conference should be relatively harmonious.

Mr Hide appears to have listened to his critics. His state of the nation speech 10 days ago, which outlined his pitch to make Act relevant, placed much less emphasis on the need to hold on to Epsom - Act's current lifeline into Parliament - and more on building Act's party vote.

Act's reliance on Epsom, which removes the requirement for Act to meet the 5% threshold on the party vote, has long rankled with members aligned to Roy and Sir Roger Douglas.

That faction felt that Mr Hide's grip on such a trump card gave him too much power.

They also saw it as the political equivalent of welfare dependency; a crutch that was sapping Act's will to develop into a mature MMP-style party like the Greens.

The problem is that the advance from populism back to purity of principle will take a long time to pay electoral dividends.

In the interim, Act needs Epsom. The question at this election is whether Epsom wants Mr Hide.

The prime minister is understood to have told party workers that his need for coalition partners over-rides any local desires for Epsom to return a National MP to Parliament.

However, National's soundings in the electorate are understood to show Mr Hide is currently running well behind a prospective National candidate, in part because he is extremely unpopular with female voters.

National will stand a candidate. But it will bide its time as to whether that candidate campaigns solely for the party vote.

Or whether, this time, it sees no likelihood of a Lazarus-like reprieve for Mr Hide and Act and simply cuts its losses and takes back the seat.