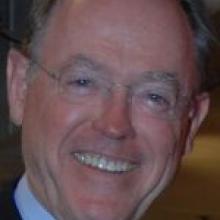 How many more times is TV news going to repeat that clip of an ungainly-looking Don Brash slowly and awkwardly squeezing into the driver's seat of a midget car at Auckland's Western Springs speedway in 2005?

Or for that matter the similar squirm-inducing pictures of the-then National leader only one faltering step from making the wrong kind of publicity splash as he tottered along a plank to board a boat in Wellington harbour.

Dr Brash's carefully calculated takeover of Act New Zealand makes an utter nonsense of this image of him as some old duffer with one foot already planted in the retirement village.

Dr Brash himself at times can deliberately ham it up and play to such stereotyping in an absent-minded professor kind of way - but only to disguise the kind of ruthless single-mindedness which was very much to the fore in his merciless blitzkrieging of Rodney Hide this week.

If age is an issue with Dr Brash, then clearly the older he gets the better he gets.

As Helen Clark discovered, he is a deceptively dangerous political opponent. He may give every appearance of being a refugee from a more genteel political era. But his politeness; his disarming demeanour; his seeming reasonableness; the reasoned nature of his arguments; his seeming frankness ("frankly" is one of his favourite words); his willingness to acknowledge other points of view (even if he discounts their validity); plus his huge credibility built up during his years as a Reserve Bank governor all help him reach audiences other politicians can only dream of touching.

His ability to communicate so effectively with the electorate was once Labour's problem. It is now National's problem.

No doubt his move against Mr Hide received complicit encouragement and backing from some quarters within National.

What seemed good in theory suddenly looks more problematic in practice for the ruling party, however.

Sure, Dr Brash's presumed rescue of Act may well give a grateful National the viable and self-sustaining long-term coalition or support partner it so patently needs.

The question then is what kind of a partner will a Brash-led Act turn out to be?

The bad news for National is that it will not be the compliant version run by Mr Hide.

National has had it pretty easy in terms of friction with either Act or the Maori Party. Both support partners have put up only meek resistance to National which has simply turned to one or other for legislative backing according to the ideological nature of a particular policy.

Both partners have occasionally poked sticks at one another, but without any rancour to destabilise National's governing arrangement.

Act, for example, failed dismally to provoke a public revolt on the revised law covering ownership of the foreshore and seabed. The Maori Party ignored Act's campaign because it had already won the argument and had largely got what it wanted.

Dr Brash's obvious intention to renew his longtime onslaught on Maori separatism and what he sees as the misguided notion of "partnership" as somehow being conferred by the Treaty will be a red rag to the Maori Party bull.

It will go down well with those Pakeha who think National has kowtowed too much to Tariana Turia and her colleagues.

Dr Brash's message that National has made only "glacial" progress in reinvigorating the economy will also find favour with some who deem John Key and Bill English to be less than courageous on that front.

Dr Brash has tried to link the two broad issues, saying that unless tensions between Maori and other New Zealanders are resolved in the "right way", New Zealand had "no show" of catching up with Australia in economic terms.

However, Dr Brash's prescription for managing both the economy and race matters is going to make it much more uncomfortable for the Maori Party to be seen working alongside National especially if Dr Brash gains real traction with voters.

Dr Brash's return to the thick of politics does not mean Mr Key's popularity is going to suddenly plunge. But Dr Brash's presence will offer a test of whether Mr Key's high personal poll ratings are by default of there being viable alternatives.

The first price National may have to pay for Act's survival is foregoing the current possibility of winning an outright majority on its own in November.

With Labour down to its core support, the only source where Dr Brash can realistically pick up votes is from National.

If Dr Brash takes votes from National's right flank, Mr Key cannot compensate by moving more to the centre. He is already positioned about as far to the centre as he can go.

Mr Key's priority, however, will be to underline that positioning by stressing that any revival in Act's electoral fortunes will not automatically force some lurch to the right on National's part.

Mr Key's ruling out of any likelihood of Dr Brash becoming the finance minister is an important signal in that regard, given Phil Goff, Winston Peters and even Peter Dunne are trying to make political hay by warning of such a rightwards shift.

Dr Brash, too, faces personal challenges. He is bullishly talking of picking up 15% of the vote. Act's share of the market is never going to be anywhere near that large, especially with National being so popular. While Dr Brash may well increase Act's leverage, that is no licence to run amok in the MMP china shop.

Dr Brash will have to swallow unpalatable compromises unless Act sits outside Government on Parliament's cross-benches. Surely, though, Dr Brash has not embarked on his latest political crusade without the intention of securing ministerial portfolios down the track.

The next set of opinion polls will be critical in revealing the impact of the Brash factor. In the meantime, National Party headquarters will now be poring over the two reports produced by the 2025 Taskforce to see where policy compatibility is possible.

Despite Dr Brash's disclaimers, these documents are close to being an Act manifesto. In one stroke they have gone from gathering dust on the shelf to becoming required reading in the Beehive.