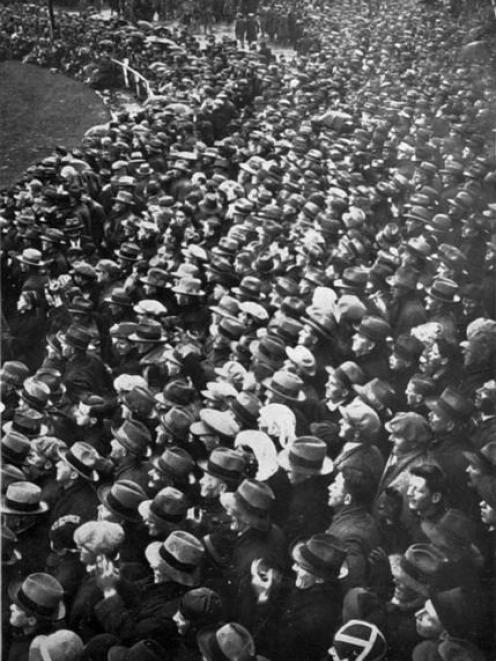 A section of the crowd at the New Zealand v Britain match at Carisbrook in 1930. Photo from the Otago Witness files.
When a South Dunedin swamp first became a sports ground, no-one could have predicted Carisbrook's eminent future. No-one could have imagined Carisbrook as one of the world's rugby cathedrals, as the focal point for rugby and cricket in Otago, as a field of drama and dreams.

The time has come for this special old lady of New Zealand sport to retire as a premier home of All Black rugby. The Silver Fern, the All Black haka, the national anthem and the test matches themselves will, by about 9.15pm today, be consigned to history.

What a life she's lived - from gestation with the Carisbrook cricket club in 1874, to the first major event when Otago met Tasmania in cricket in 1884, to the first rugby international two years later when New South Wales lost to Otago, to 1906 when the Otago Rugby Football Union bought the lease, to the first test (against the Anglo-Welsh) in 1908.

What a long and illustrious prime she experienced as grandstands, turnstiles and toilets were constructed, as extended terraces boosted the capacity in the mid-1950s to 45,000, and as lights and corporate boxes were installed.

The whack of willow and the thud of leather resounded through the summer and winter respectively, while all sorts of other sports and community activities also featured.

The "multipurpose" use of Carisbrook was at its peak, continuing through later decades with national league soccer, hosting a pool of the world under-17 football competition and through concerts.

Carisbrook has had her limitations. She has struggled to keep up with ever-increasing expectations, the infamous sawdust in the changing rooms and primitive conveniences being picked out and picked on.

One English cricket writer, looking out on the Hillside workshops, once compared the place to a rundown Polish shipyard.

But Carisbrook has always been infused with abundant character and charm, and we have been proud of her, bald concrete, gravelly terraces and all. There's been the Scotsman's grandstand, the scarfies on the terraces, the burning couches, the nearby tent cities, the chants and cheers, the mud and, latterly, the immaculate surface.

There's been the George Nepias, Ron Jardines, Don Clarkes, Jeff Wilsons and the stars from all the leading rugby nations. How appropriate that Wales, having not played a Carisbrook test before, completes the set of leading international teams.

There's been the sunny afternoons and the warm northwesterly evenings once night games arrived. Just sometimes, a bitter wind from the south or drizzle from the harbour has chilled the big event, without ever quite dampening the spirits of the hardy and the enthusiastic.

Carisbrook, home to its 37th All Black test and, optimistically, the 31st All Black victory, is retiring in stages. Cricket, with its glorious memories and great names, has gone, and All Black test matches are next.

In 2011, Super 15, club and provincial rugby players will make their way through the tunnel under the main stand for the last time as attention turns to the Forsyth Barr Stadium. A colt from a new generation will soon be ready for the challenges of the 21st century. While its future is promising, no-one can be sure how it will run in the decades ahead.

Hopefully, it witnesses glory and spectacle on something approaching the scale of its predecessor.

June 19, 2010, though, is Carisbrook's day in the sun. She bows out with her distinguished and honoured place in the parthenon of national and international rugby and cricket history, as well as in the hearts of thousands in Otago, firmly secure.