Drilling into the debt mountain

Amid the bickering and sabre-rattling, some clarity is beginning to emerge on the true extent of the impost Forsyth Barr Stadium funding is imposing on Dunedin city debt levels.

Part of that funding - $5 million annually, to be precise - is supposed to come from dividends yielded by the council's various companies, under the umbrella of Dunedin City Holdings Ltd.

This week, the local body equivalent of a bar-room brawl broke out over the stadium, and the council debt accrued to sustain it, following a confidential meeting in which DCHL briefed councillors.

On Wednesday, Mayor Dave Cull "spoke out of school" in telling the Otago Daily Times he did not believe DCHL had the funds to meet its commitment.

There appeared to be a considerable gap between projected revenue and what would be needed for the dividends, he said.

"I [brought this up] before the elections," he said. "It is an unsustainable level of debt."

When asked to comment on the issue, Cr Syd Brown delivered what can only be described as a caustic broadside in the mayor's direction - "If people are going to talk out of school they are going to have to take the consequences of talking out of school" - and Cr Paul Hudson suggested it was business as usual, before dropping what was to some a minor bombshell.

While it might have been common knowledge to councillors and others, many ratepayers were surprised at the stark revelation the council's holding company was meeting its dividend obligations to stadium debt not through generated income, but by taking out further loans.

It was borrowing money to pay off debt.

In case it could not be clearer, Cr Hudson elucidated: the company had been paying a dividend to the council that was higher than what it was earning, and the company was having to borrow money to fund it. "There will come a point in time when that is no longer sustainable," he said.

That time, say the council's many vociferous critics, was some years ago, and certainly before the idea of an all-purpose covered stadium was even proposed.

The company was not running out of money "tomorrow or next year".

Given the enmities the issue has engendered, this particular debate will run and run - with the stadium a smouldering source of contention at every funding meeting when other council opportunities are foregone or spending cuts are mooted and made, as they must be.

The cause and timing of this particular eruption should, however, come as little surprise, the only curiosity being the mayor's comparatively tepid prescription: the council would "have to look at cost-cutting options seriously".

Were they not doing so already? And if not, why not, given the extravagant rates rises that ratepayers of this city face over coming years, including the 7.5% increase for the next financial year?

Mr Cull can hardly have been unaware of the situation with respect to DCHL dividends and stadium debt.

Last month, in a debate following presentation of the DCHL's statement of intent to the council's strategy and finance committee, Cr Hudson clearly signalled the impact of the dividend requirements, while others pointed out decisions made in the past - including the decision to proceed with the stadium - had been based on the understanding there would be tight financial years in the future.

So why the breaking of ranks now? Mr Cull has come in for heavy criticism by those whose anti-stadium cause he appeared to champion prior to his successful election as mayor, the more intemperate of whom would suggest the stadium should be pulled down.

Mr Cull, however, must deal in reality rather than fantasy, a fact which most recently confronted him, and other councillors, in the matter of a further $5 million for stadium extras which the council agreed to fund.

This was for elements such as kitchen fit-outs, scoreboards, signage and so on.

Without them the venue would hardly be fit for purpose, and in the end, regardless of the bitter arguments as to how and why such items were not included in the stadium's guaranteed maximum price, there was only one way the argument would go.

The mayor may have won some of them back with his latest stand but, in blindsiding some of his colleagues, he may also have succeeded in making a difficult mayoralty even more challenging. 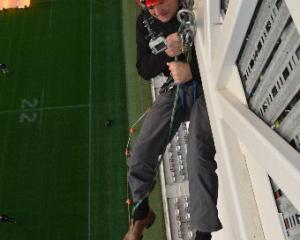