Fancy, lace-curtained locals not my cup of soup 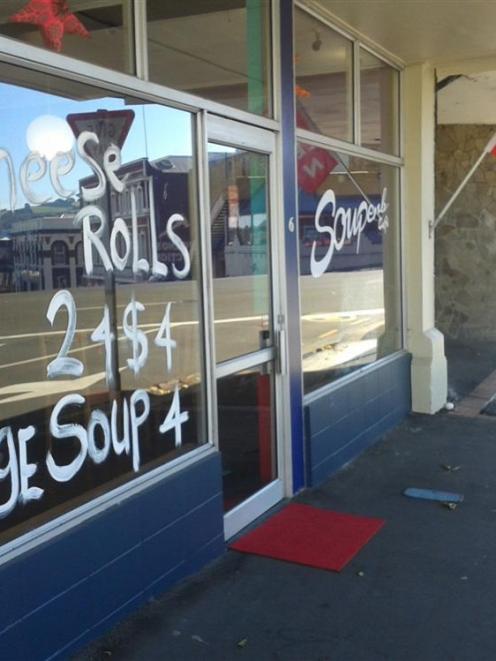 Roy Colbert's preferred ''local''. Photos supplied.
One aspect of English life I treasure, possibly the only one now that I open my mind utterly and run through all the possibilities, is The Local.

The idea of a quaint little cafe or pub close to your house, where, as in Cheers, everybody knows your name, is an enchanting one indeed.

I prefer my local to be a cafe over a bar, and my closest cafe is only a few short blocks away, at the bottom of Carroll St.

It has been a cafe for quite a while, albeit with different clienteles, decor and names.

I would be insulting the bargain-hunter's mecca that is Hayward's Auction Rooms, or Shop On Carroll, which, I think anyway and I'm not going to waste time arguing, has the best window displays in town, to say Souperb, for this is what the cafe is currently called as it is a soup kitchen, lies in a modest to lower decile part of town.

But modest to lower decile is often where the weird and wonderful stuff is, so let's raise a metaphorical middle finger to those lace curtain cafes with white tablecloths and delicate little cups you can't squeeze your finger into, and revel in the beauty of a common no-mess-Charlie soup kitchen. 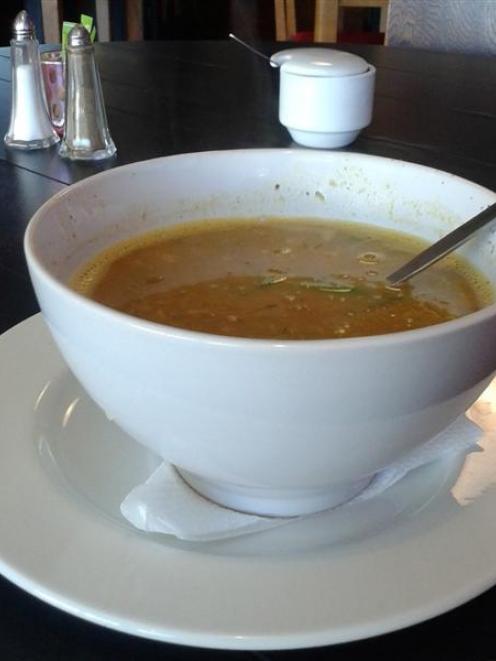 Roy is bowled over by the size of the soup serving.
I am battling to remember the previous incarnations of this cafe.

When we moved into the area, it was called For Lease, then came Feast, followed by another one strangely using that same name, For Lease, presumably some intellectual property issues were settled and a few local lawyers bought fresh BMWs, then an American diner, forgotten the name, another For Lease, longer-lasting this time, and now Souperb, big white writing on the window with prices.

I liked the American diner.

You don't send those ones away to be dry-cleaned at $3 a time, you just wash them out the back.

Money was spent on decor, it looked rather nice, and reasonably authentic.

Could you turn it up please, I asked the woman, whose place it clearly was. Sure, she said.

Who is this, I asked. Me, she replied.

And she told me of her career singing around Texas for years on the rodeo circuit; rough and ready wasn't the half of it, every day of the week much of the time.

She said all the musicians on her CD were Hall of Famers.

She said she had worked with Willie Nelson.

I interrupted at this point.

I told her I had damn near worked with Willie Nelson myself.

Well, maybe I was pulling her chain just a little.

But in 1997 we did stay next door to Willie Nelson in Spicewood, a few miles out of Austin, though next door in a rural area like this, and Willie had a golf course between his house and ours, can be quite a distance.

We drove to his house.

But he was out touring, so I never got to meet him.

But I met his gardener, who looked exactly like Willie.

HALF a degree of separation.

Very few people in Dunedin can say this.

I wanted to buy one of the rodeo queen's CDs but she just gave me one.

I still play it at prestigious dinner parties. Classy.

And, I say, as guests marvel at its classiness, the singer is a close personal friend.

That isn't just cheap, that is illegal.

My friend Lesley, who runs Otago Access Radio, spent a year rating cheese rolls around Dunedin when she was managing Radio One.

She has never heard of a price like this.

Last week, twice, I had vegetable soup in a bowl so large you could put a diving board above it, toast, coffee and two Jaffas for $6.

I remember once in Switzerland paying $92 for two Jaffas.

The stadium will have turned Dunedin into a city of soup kitchens by 2020, but at least we will have a good Local.