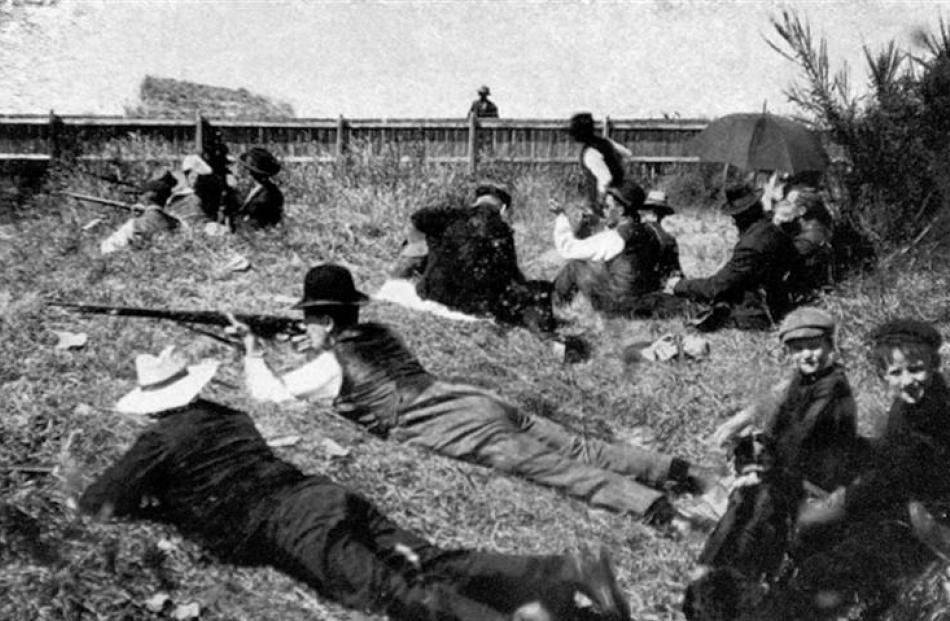 The Pelichet Bay Butts at the annual prize firing in 1905. Photo by Otago Witness.

Scientists attempting to explain the feat of the Rosetta spaceship whanging a robot thingee down on the comet 67P/Churyumov-Gerasimenko, said it was like shooting a bullet at a speeding bullet while blindfolded and riding a horse.

I don't understand scientists, never have, what's the point, but I do know about bullets, blindfolds and horse-riding, such is the wide expanse of my life so far. I have fired bullets. I think.

It was at the New Zealand Army shooting range at Pelichet Bay, where a leading University Scholarship-winning school, Logan Park, now resides.

Sociologists would say this is ironic, and I was there shooting at targets 10 miles away so that Otago Boys' High School upper management could say they were making me into a man.

I was 12 years old and 18 inches high, so it was sensible to give me a giant .303 which gouged a hole in my shoulder with every kickback.

The targets would be reeled in to determine our potential for killing, and my targets were always clear. Were they bullets?

Those building the student housing on the hill behind the school are about to find out. Colbert's Cockups.

I hate to put that record on the turntable again, but I have been technically blindfolded all my life.

Had the NZ Army affixed targets to the end of my gun, I still would have missed everything, though I might possibly have brought down a seagull.

And riding a horse?

Again, I have done this.

Perfectionists will rise from their chairs and point out my sole experience here was an old and very slow horse on Norfolk Island in the mid-1980s, which travelled so slowly I swear it often went backwards.

But if anyone out there has ever ridden a horse, they will know the skill required, the fear of surprising height off the ground in those things equestrian people describe furtively as saddles, then they will know precisely of what I speak.

So that was what the Rosetta people had been doing for the past 10 years, chasing this comet thingee through the galaxy at a gadzillion miles an hour, no people on board, not even one of Skinner's monkeys - let's not forget the further 20 years of planning - to achieve one of the greatest moments ever in the history of space exploration.

There was even talk, from the scientists, that the information picked up off the comet could establish how we came to be Earthlings, yes, the Origin Of Life.

Why then, in the sacrosanct name of Britney Spears herself was this placed only fourth in TV One's News last Thursday night?

TVNZ is not the brightest biscuit in the packet, we know this through its claim New Zealanders don't watch documentaries, even though viewers are flooding to the brilliant NHNZ series Our Big Blue Backyard on Sunday nights, which has outrated X Factor and The Voice.

We also know this through Seven Sharp, the watching of which is like having your brain eaten away by maggots.

But yes, Fourth Most Important News Item: The Origin Of Life.

What were the first three?

Here I must inevitably go back to the weapons training of 1960s high schools, wherein fresh-faced little boys put on this planet to learn Latin and French were taught the essentials of crime, wherein life itself becomes irrelevant.

Item one was a killer on the run who had stated he wished to be famous, hence our television crews chased him and his victims through three countries.

The second was a very naughty ambulance driver who stupefied sick people in his ambulance, and the third, a 38-year old woman described as a New Zealander even though she had lived in Australia for yonks, being freed from a Bali jail after being caught with half a hashish joint.

Yes, more important than the origin of life and 30 years of miraculous scientific slog.

Crime then, is all.

Esol students at our high schools will soon be taught that Crime and News are synonyms.

Correcting THAT impression will be like shooting a speeding bullet blindfold while riding a horse.