Getting the wider picture on human condition 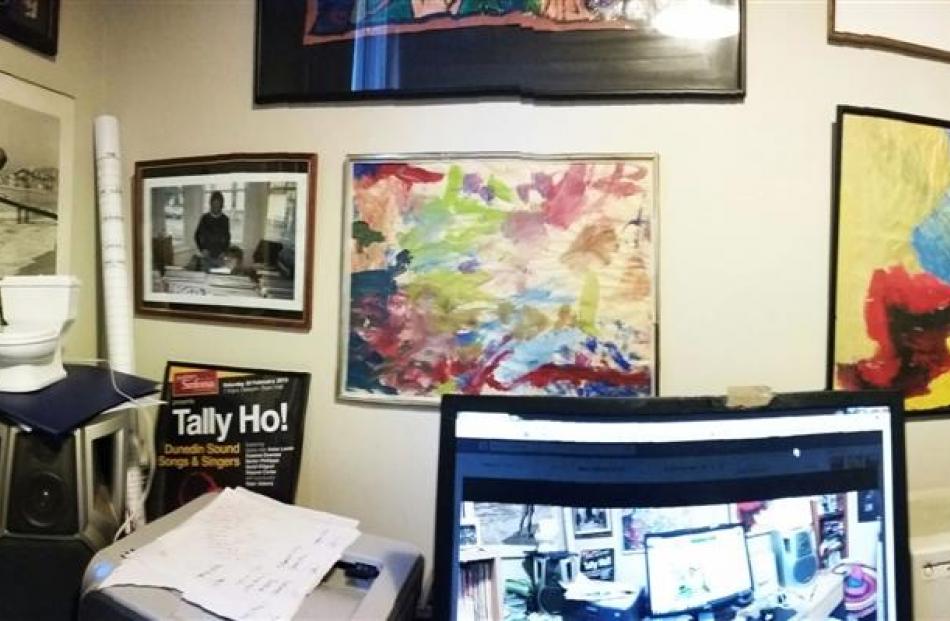 A man cave in all its glory. Photo by Roy Colbert.

Although my father was a semiprofessional photographer, I have never spent much time learning the craft.

Point and shoot was invented for people like me, impetuous, impatient, lazy, talentless, incapable of dealing with manuals or instructions.

But cellphones have mercifully embraced us, smelling the money they can suck out of our brainless brains, and offering as evidence photos that are really almost adequate.

Only dropping the cellphone to the ground during shooting, in fact, can logically prevent photographing a tree or a cat and making it actually look like a tree or a cat.

I have been photographing trees and cats for some weeks now with my Samsung Galaxy S5, 16 megapixels, Jimmy, and last weekend I ventured bravely into that area idiots should never go - Features.

Were I able to understand instructions, I would have watched or read the freely available Getting The Most From Your Samsung Galaxy S5 stuff that is out there, but I have been burned, nay, carbonised, by Getting The Most Out Of lessons before: I just jabbed at one of the meaningless icons on the phone's camera screen and held my breath.

It was called Panorama.

I had dabbled with panorama before, when cameras used paper film.

I would photograph a vast and wide landscape, get the photos printed at the chemist, usually for about a dollar a shot, and then Sellotape them all together for a panoramic view.

The result was always cock-eyed and crooked, an image as wobbly as Escher at his eye-blinkingly wobbliest.

But the beauty of rapid-fire digital photography is you can take hundreds of shots in seconds, and by the law of averages, if nothing else, you will emerge with at least one good one.

In such a way last weekend I managed to photograph a yawning sweep of my ridiculously cluttered man cave, getting nearly half of it without falling over during the panoramic slow sway.

I didn't even drop the phone.

Let us therefore look more closely at just how much a panoramic shot can reveal.

We will work from the far right and we may need to use the zoom tool.

In the top right-hand corner you have the painting Jeune Fille aux Fleurs by Renoir.

I am not saying this is the original, but neither am I saying it is not.

As Taylor Swift has often said, a man cave worth its mustard should always have a Renoir in the top right-hand corner.

In the first of three bookcases brimming with books we also see a glowering Sylvester and Tweety Bird cup, alongside a very wonky Dalinese clock whose stem never stops moving.

Then an empty bottle of 2011 All Black shampoo and, on the shelf below, the inevitable broken microscope and a plastic Bugs Bunny statuette which is remarkably similar to an Oscar.

And further down, a small box that I have never opened entitled iPod For Dummies.

Substantial art from the grandchildren follows as we move left, the one called Bird On Beach by the colourist Rowan Metreyeon being superior to most of what I have seen in French art galleries, then a photo recently exhumed of Records Records by the acclaimed rock'n'roll photographer Patrick O'Neill.

A Tally Ho concert poster in a frame originally housing a tree or a cat sits against the wall, an ongoing reminder of last February's wonderful Dunedin song celebration, and then on the south wall, not that panorama allows you north or south, a fantastic photo of Robert Mitchum kicking sand.

Nobody was cooler than Robert Mitchum back then.

Justin Bieber kicking sand would be a waste of sand.

A toilet phone sits atop an ancient Aiwa speaker which delivers fat low-quality hard rock to make me work faster, and then on the far left, grandchildren again in a poster advertising a magic show they performed to a capacity crowd with their friend Lily, the frame again once having housed a tree or a cat.

There is clutter and mess where e'er you look, endemic to proper man caves, and the panoramic photo itself is the computer's wallpaper, hybridding Escher with the phenomenon of Russian dolls. You know, photography is sorely underrated.