So glad they chose wisely back in 2011 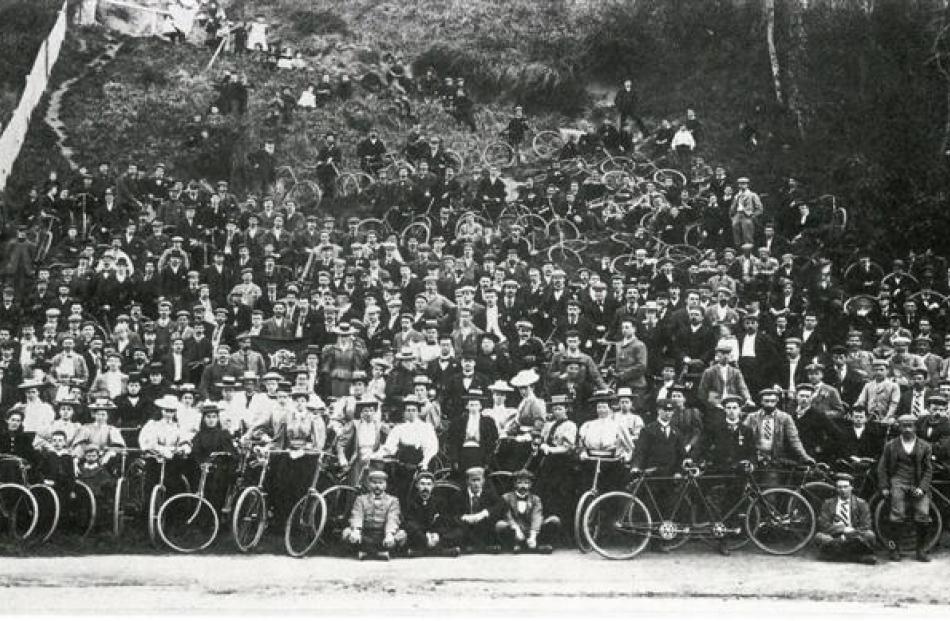 Members of the Dunedin Cycling Club pose for a photograph about 1910. the location is not specified. Photo supplied.

What might Dunedin's cycle network be like in 10 years' time? Hank Weiss, the Dunedin educational director of cycling advocacy group Spokes, looks ahead and imagines what an article in 2021 might say.

It is with pride and immense satisfaction that we celebrate the completion of the last piece of the Dunedin Cycle Network, 10 years from the roll-out of the Dunedin Strategic Cycle Network consultation in 2011. It was, in retrospect, one of the most important community decisions at the beginning of a most difficult decade of transition.

Many words were written by the refreshed city leadership in 2011 about wanting Dunedin to be a livable city, a world-class city, a vibrant, safe, healthy city. But concrete progress towards those lofty goals began to take shape only from the smart investments in the cycle network which revitalised transportation options, along with our confidence and the connections within our communities.

The initial plan was conceived as a 20-year effort. But it was clear early on from the urgency around soaring petrol prices, questions of cyclist safety with the old infrastructure, soaring rates of obesity and health-care costs and realisation of the large bottled-up demand from earlier failed cycle strategies that bolder action was needed. A decade later, we salute those leaders and the ratepayers for making the right choice at just the right time.

Longtime resident and regular cyclist (and now Mayor) Adrienne Unkovich was a student at the university when the plan was first adopted and remembers what it was like before the cycle network and its thousands of commuters of all ages and gender were a common daily sight in Dunedin.

"I remember when the plan went through. It was incredible how the pent-up demand, clearly articulated in the community surveys at the time, turned into a powerful wave.

"But I also remember that the plan almost didn't pass because of not paying enough attention to the research that showed the economic, safety, health, and environmental benefits of modern cycling infrastructure. We also saw that the cycle projects created more jobs per dollar spent than traditional road projects, which was good at a time of high unemployment."

Yes, it was satisfying to watch the changes over the last decade. As the community witnessed more and more cyclists using the infrastructure improvements, more and more residents began to cycle. They always said, "Build it and they will come", and did they ever when petrol passed $4 a litre in 2013!

What surprised many, though, were the across-the-board improvements in the safety of cyclists, pedestrians and motorists, due to the different traffic mix, the more appropriate speeds, the greater visibility, and fewer conflicts on the well-designed network.

The city's economic development director, Gerard Buky, also commented on the robust economic impacts that the bicycling infrastructure has had on Dunedin the past 10 years.

"When the plan was first adopted," he said, "the city knew that it would be an engine for economic development, giving Dunedin a competitive advantage over other New Zealand cities.

"At the time of adoption, Dunedin was ageing rapidly. The city knew that investing in both on-street and off-street cycle infrastructure would help attract the younger generation looking for more transportation options.

"We also benefited from the data that showed that every $1 spent on the cycling network generated $3.88 back to the community. Personal cost savings were documented (in 2011 dollars) of $1.75 per trip for each motorist who switched to a bicycle. We also saw $2.14 of health saving per km of cycling, and reductions in crashes and in air, noise and water pollution.

"It all quickly added up to substantial savings when we needed it the most. It was a time of fiscal constraints, but the community knew it was the right investment at the right time."