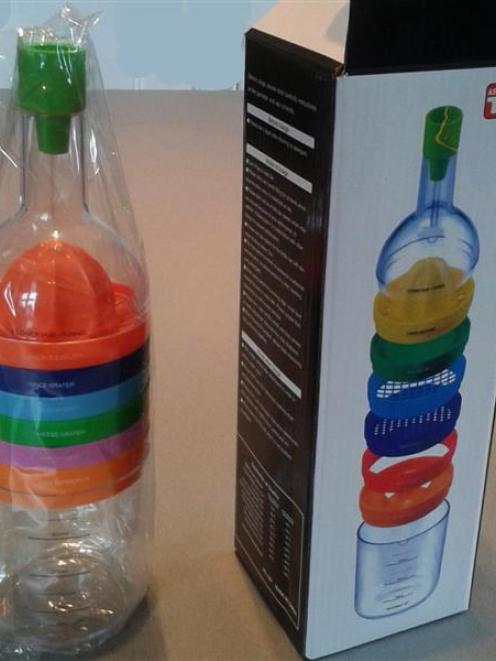 Photo supplied.
Despite predicting just about everything that has ever happened, the prophet Nostradamus has come in for a power of criticism over the years.

But not from me. I believe his every word, none more so that his at-the-time highly-contentious view that the phrase ''As Seen On TV'' would one day be a byword for retailing excellence.

Nostradamus would have been 511 in December, had he bothered to also predict that he would live that long - he was ironically known for his lack of self-ambition so it is well nigh inexplicable he would have been seamlessly familiar with television and Suzanne Paul.

But there you go, ours is not to question other-worldly genius, but merely to shop carefully in the main street of Dunedin for items which boast this imperious phrase, this absolute guarantee of high quality, ''As Seen On TV''.

A genuinely smart New Zealand political party would do well using this as an election slogan over the next month.

Last week in The Outlet Store, I found such a TV-Seen item, and now, even nine days on, I am still marvelling at its brilliance, its turn of phrase on the box, and, yes, its box.

I am surprised there is no bright orange sticker proclaiming ''As Prophesised By Nostradamus'', but that would be tacky, and if Nostradamus was only one thing, he was not tacky.

Packaging is all, and the box for this thing, well, let's not call it a thing, let's call it by its proper name, bin, yes, lower case, the box is STUPENDOUS, using all four sides to give the consumer more information than any human could ever understand.

Plus a beautiful illustration of bin, sub-title, ''kitchen tool like bottle''.

Bin is eight kitchen tools in one.

Each item is detailed on the box as regards what heat and cold temperatures they can handle.

And there are many warnings.

Please don't pull at or fold cap opener, which may not recover because of once deformation.

I think that's fairly clear, if you are familiar with William Burroughs' cut-up technique of writing.

Please don't wipe forcibly words and lines printed on each component because they may disappear.

This is so thoughtful.

Many times I have thundered into a store complaining that the lines and words on a thing have forcibly disappeared because I had wiped too hard while doing a mountain of housework.

And once you lose the lines and words, you are truly buggered.

The eight kitchen utensils are described from top to bottom.

What a formidable lineup of making-things-easier this is!

We begin with Funnel and Lemon Squeezer, common, always useful, and then we have The Seasoning Grinder, which ''triturates seasoning such as ginger, horseradish and etc.''

Interestingly, the fourth item, The Egg Pulverizator, carries exactly the same definition as The Seasoning Grinder.

A nit-picker, too, might ask why someone so illiterate as to use the phrase ''and etc'' also uses such a complex Scrabble word as triturate.

But let's not pick nits.

The Cheese Grinder, a tough one to use properly, I haven't managed it yet, also triturates, while The Bottle Opener, a rubber circle, is actually for jam jars, not bottles.

But most rational thinkers have jam jars.

And finally there is The Weighing Cup, beautifully described ''It with degree scale is used for weighing a small amount of things.''

350mls. Not for measuring the amount of sugar that goes into a pavlova, or bootleg vodka.

Bin has so many levels of fun.

Children will love bin because it hybrids Russian Dolls and Lego.

Home designers will insist on bin as mantelpiece garnish, while extremely intelligent people and Rubik Cubists will try to reassemble bin as they would uncork a Mensa IQ test.

Helpful hint: make sure you have Bottle Opener the right way up.

Bin went into the marketplace on TV wheels at $9, and is now just $5.40. Nostradamus himself could never have predicted a bargain as triturative as this.