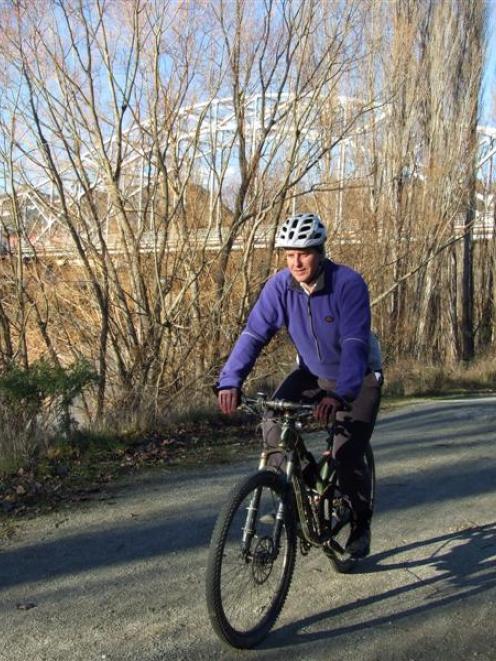 Central Otago District Council business development manager Jonathan Gadd near the Alexandra end of the proposed Roxburgh Gorge cycle and walking track. Photo by Lynda Van Kempen.
The Roxburgh Gorge cycle trail is back on track. The Central Otago District Council has applied to itself for resource consent to carry out work and build structures associated with the trail.

The council is the proponent of the 34km walking and cycling trail between Alexandra and Roxburgh but a trust is being set up to take over governance of the track.

"There are three major streams of work ahead to make this project happen. One is gaining resource consent, one is successfully negotiating easements with property owners and the third is gaining funding. All are being carried out at the same time," council business development manager Jonathan Gadd said.

Roxburgh Gorge is one of the trails which have been earmarked for funding under the New Zealand Cycle Trail Project. The Government has indicated it will fund $2 million of the $3.3 million construction cost.

The project missed out on funding in the latest round but Mr Gadd was confident the three issues raised by the cycleway group were "straight forward" to remedy and would be completed by the deadline for the next round of funding in October.

"It's fair to say that the Government has an ambitious timetable and we're hugely motivated to work as quickly as we can. This is a huge thing for the community, but even when we've got resource consent, construction might not start straight away. It will depend on the negotiations with landowners, because we're not going to jump on anyone's toes," he said.

The trail goes through 11 private properties and Department of Conservation, Land Information New Zealand and Contact property, so easements had to be gained. In its consent application, the council said three bridges would need to be constructed, spanning Butchers Creek, Gorge Creek and Shingle Creek.

Toilets would be built at Butchers Creek, Gorge Creek, near Herron's cottage and at Elbow Creek.

The trail would provide greater access for people to many historic sites and would also give visitors a chance to see aspects and elements of hydro-electricity generation, the council said.

The trail would expand on the success of the Otago Central Rail Trail and link with the planned Clutha Gold trail at the Roxburgh end.

It would open up the potential for landowners to provide services and activities, subject to consent, such as accommodation, meals and tours, to cater for trail users.

The creation of the track would have positive social, economic and cultural effects for the community and give people a chance to "experience world class scenery", the council said.

Any negative effects were likely to be minor and barriers could be placed, or the track could be slightly realigned, to protect historic sites.

An independent commissioner will hear the resource consent application. Submissions close on September 2.


ROXBURGH GORGE TRAIL
• Trail spans 34km between Alexandra and Roxburgh.
• Consent sought for trail works and structures.
• Earmarked for Government funding as part of national cycle-trail project.
• Track follows true right of Clutha River.
• Negotiations still under way with 14 landowners.
• Application will be heard by an independent commissioner.
• Submissions close on September 2.
• Trust being formed to take over governance of track.