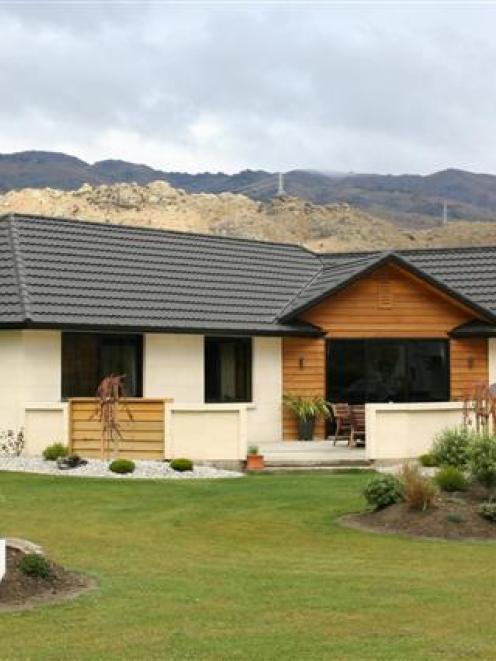 This 2008 national award-winning home, in Central Otago, is built from Oamaru stone. Photo supplied.
A change of heart by the Central Otago District Council on the exclusion of Oamaru stone as a building material for rural homes has been hailed as a victory for common sense.

Following a raft of opposition to changing the district plan so Oamaru stone was specifically excluded as a suitable building material, the council had "taken notice" and changed its mind, council hearings panel chairman John Lane said yesterday.

The council had promoted 23 changes to the district plan, aimed mostly at addressing rural development issues, and heard submissions on those changes over six weeks last year. About 300 submissions were received and the council's decisions were made public on Saturday.

Sixty-five submitters requested Oamaru stone be reinstated as a permitted building material. The council's initial stance, which caused an outcry in 2009, was prompted by suggestions the material was too "reflective" and cream or white colour finishes were highly visible in some rural settings.

"We received some pretty strong submissions and opposition to its exclusion, so certainly you could say we ... have taken submitters' comments on board," Mr Lane said.

"We were told Oamaru stone was a natural product and would weather with age, making it less reflective in a rural setting."

The council has amended its proposed change, retaining stone as a permitted building finish and making no mention of excluding Oamaru stone.

An opponent of the change, George Kelcher, of Oamaru, the immediate past-president of the Institute of Quarrying, said yesterday those three words - "excluding Oamaru stone" - had cost many people time, effort and money, "when the reality is, they should never have been in the plan in the first place". "It's good to see some common sense at last, albeit at a huge cost to people."

Another opponent, John Dooley, a director of Dooleys Masonry in Oamaru, said: "It's a good decision. It [Oamaru stone] should never have been excluded."

"Its colour or reflectiveness when new should not have been considered in isolation."

In its decision, the council conceded Oamaru stone might be an acceptable exterior finish in many rural landscape settings but was inappropriate in some "sensitive" landscapes, because of its contrast with a dark schist background.