'E-mob' to be presented to PM today 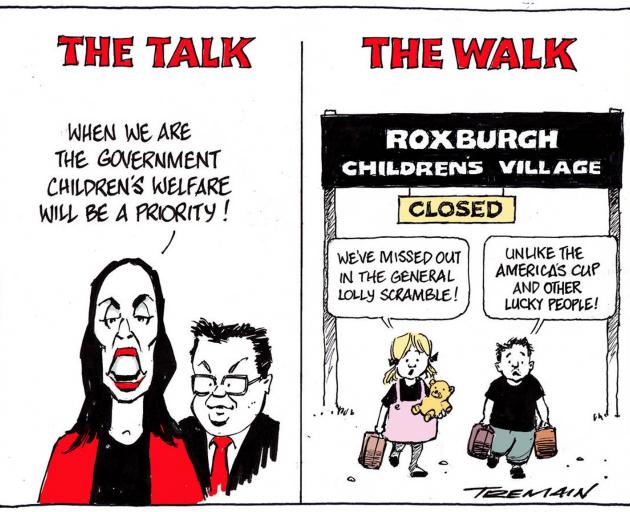 Southern mayors and residents are going to the Prime Minister today for an e-mob campaign protesting the closure of the Stand Children's Services Roxburgh children's village, while another national campaign is also fighting the closure.

Residents south of the Waitaki River are being asked to email an Otago Daily Times Garrick Tremain cartoon about the closure of the village to Jacinda Ardern today - one month from the scheduled closure of the Roxburgh village.

The campaign comes as another online petition also tries to stop the closure of the Roxburgh village and another Stand village in Otaki also scheduled to close.

Bronwyn Ngatai, director of ADHD Foundation for Aotearoa NZ, initially launched the petition in the North Island to try to stop the closure of the Otaki village, but she said last week the petition also included the Roxburgh Stand village.

She encouraged southern residents to sign it to voice their protest at the closure of both facilities.

"Every signature is a voice for every child - the more signatures, the louder the voices will be.''

Ms Ngatai said the Government had not carried out a "proper risk assessment'' about the closures, and said the villages performed vital work with at-risk children and families.

Ms Ngatai said one of her children had been referred to Stand for various issues, and "from that day our lives have come right''.

Closing the Stand villages would see a higher risk of child suicides, domestic violence and a higher crime rate by children and youths, she said.

She is hoping to get more than 10,000 signatures on the petition and to present it to Prime Minister Jacinda Ardern.

To get a copy of the Garrick Tremain cartoon people are being asked to email to Prime Minister Jacinda Ardern, and instructions about details of the campaign, email cartoon@codc.govt.nz.

People who do not have computer access can go to any library south of the Waitaki in order to have their names added to those for the e-mob campaign.