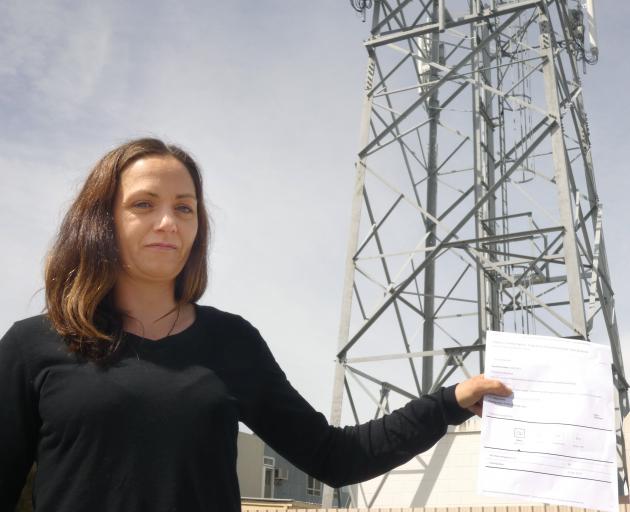 However, the telco has been unwavering in its response, saying there is no clear evidence the technology presents any risks to human health.

Mother-of-three Kelly Nyhon launched a parliamentary petition last week and has started an online community group which has nearly 300 members. By yesterday the petition had 40 signatures.

She said she had been researching the issue for about a year and held concerns for not only her children but also the wider community.

"It's potentially a big danger to us all and we haven't been consulted at all.''

Ms Nylon has an ally in former Central Otago district councillor Victoria Bonham, who said a business should not supersede the rights and wellbeing of a community.

Last month's announcement has caused vigorous debate on social media among Alexandra residents, who have shared several health and security concerns around the technology.

Some queried why there had been no public consultation on the matter.

Spark confirmed it had spoken to the Central Otago District Council, which had said "better connectivity was desperately needed by businesses and the community''.

Mr Cadogan backed the Government when contacted by the Otago Daily Times and said he had read a lot on the subject.

"I'm going to rely on the Ministry of Health's position, which says there are no adverse health effects.''

Earlier this year, Health Minister David Clark was reported as dismissing concerns raised by 230 scientists around the world about the health risks 5G radiation posed.

Dr Clark contacted the Otago Daily Times and said his response to concerns about radiation from 5G was actually that he had been advised by Ministry of Health officials that the balance of research evidence suggested that exposure to the radio-frequency produced by any transmitter, including those that would be used by 5G services, did not cause health problems, provided they complied with international guidelines.

"There have been thousands of scientific studies over the last couple of decades and there is no clear evidence that cell sites present risks to human health.

"The Spark wireless network is fully compliant with international and national guidelines limits that are based on decades of scientific research.''

The petition closes on October 31.

I would like to read one research report which is NOT funded by telecoms/phone companies that says 5G is safe. There is none out there, that is why Brussels has stopped 5G. Why should we be guinea pigs?

There are plenty out there. Quite literally thousands - why I just found 7 from BMJ by googling. Brussels have extremely tight radiation thresholds and there was enough community outrage fueled by ignorance that they postponed the installation. This is an example of Brussels not fobbing off their people, not an example of genuine radiation concerns.

Unfortunately, she doesn't go into specifics on her petition - simply "large amounts of radiation". The waves that would be emitted by this tower are non-ionizing, very weak and cannot strip chemical bonds. So they simply cannot damage you, try as they might. Literally, her microwave is more dangerous to her children.

Maybe, but she knows what's good, or not, for her children. The report does not say she has a microwave oven. To list the research that she has obtained may not fit the column inches allotted to the story.

"Maybe, but she knows what's good, or not, for her children".
Honestly, I wonder if she does. If she thinks this tower will cause harm, then in this instance she doesn't know. Not to speak to her abilities as a mother outside of this, she may well be an outstanding parent who is genuinely concerned. But getting people to sign a petition based on very, very little information is, to me, disingenuous.

Read Robert O. Becker's papers. He was nominated for the Nobel twice for addressing such rhetoric back in the 60s. They are no less dangerous. And we have produced thousands on studies. Some examples of the physiological damage they can do: they can disrupt calcium ion signalling in all cell types, disrupt free radical signalling, disrupt mitochondrial respiration (via inductive forces on the electron transport chain), break mDNA strands, disrupt bonding networks in water (vital for hydration of all proteins), open the blood brain barrier (we use this effect to get medicines across), open zonulin bridges in the gut mucosa leading to increased gastrointestinal permeability, cause red blood cells to fall apart, resonate the intracellular iron nanomotor complexes ruining cellular respiration, disrupt thyroid function, destroy the melanopsin signalling, ruin melatonin production, and wreak havoc on the topologic insulation and warm superconduction effects present in the likes of cell, eyes, and brain. In general, the higher the frequency, the worse the damage.

This is all genuinely interesting, but if you try and find Becker's nominee, it doesn't seem to exist anywhere - though this could be because nominees aren't allowed to put this on their resume as nominees aren't regularly announced. The only article noting was from a local paper who didn't cite any sources. He was also a strong believer in the ability of EMF to effectively brain wash organisms and seemed to think lower frequency to offer extra sensory abilities. Not that someone's belief should discount all their genuine hard work elsewhere.
I agree with doing research, but reading his papers should enforce the theory that these waves do the same (read, no) harm as before. If you can offer any links to the papers that outline your mentioned physiological effects, I would gladly read them. As currently, the thousands of studies suggest quite strongly that this specific 5G network will not be an issue for human bodies. Let alone be a high enough frequency to disintegrate red blood cells - which would be alarming, and noticeable.

Spark is a strange company. They seem to care very little for the environment and use the laws to place towers anywhere they like. They cannot care for their customers if the very people complaining to Spark about tower placement are their customers. Even when the community wants to work with them to place a tower in a less visible area they simply do not listen and do not care. Of course this is all lawful but shows their lack of caring for the communities they serve or their customers living in those communities. I can guarantee not one director of Spark has a cell tower anywhere near their homes, they will make sure of that. Unless the Govt. changes the law we are at the mercy of all telecom companies in NZ.

Conversely: https://www.ncbi.nlm.nih.gov/pubmed/10334711
Though I must say it is nice to see people presenting genuine papers.

People need to know the implications of this technology because it is dangerous. I was disturbed when I saw this news as it is close to home, we live in Oamaru. Despite the assurances from the TEL COMS, this type of radiation is harmful, expensive and invasive Our government, our councils can not stop the "deployment" Our only hope is the people. Your people in Alexandra are in danger, they need information and an awareness that this is a treat. If there is ANY ONE willing to lead the resistance, I have some information to assist. Please contact us if we can help you, it could be us next!