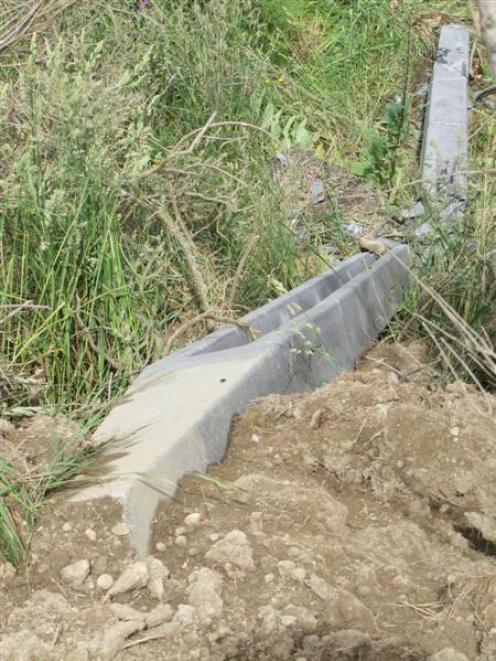 The power pole that fell over on Thursday. Photo by Colin Williscroft.
Delta Utility refused to answer questions yesterday in the wake of Thursday's accident near Millers Flat in which a lineman died.

Police yesterday named the man killed when the power pole he was working on came out of the ground and fell over as Roger Allan Steel (63), of Alexandra.

The Delta lineman had been working on his own at the time and was attached to the concrete pole, plunging 10m-12m when it fell.

The "relatively new" pole, owned by Delta, was at the Millers Flat end of the Millennium Track, he said. It was on a bank above the track.

Delta Utility Services chief executive Grady Cameron said Delta and the Department of Labour were both carrying out investigations. He declined to answer any questions about the accident.

"It will be a couple of days before we have a better understanding of what's happened."

Asked whether other power poles would be inspected in case it was a public safety issue, Mr Cameron said there were questions to be answered but it was inappropriate to comment further yesterday, as the company had to respect the wishes of Mr Steel's family.

The company later issued a statement which said Mr Steel was a valued, long-serving employee who had given 40 years' service.

"This is a traumatic time for Roger's family, [to] whom we are providing support whilst respecting their privacy," a Delta spokesman said.

"All Delta staff are feeling this tragic loss."

One of Mr Steel's friends described him as a "top bloke."

"It's an old cliche, but in this case it's true - he was one of the good buggers," Lindsay Pratt, of Alexandra, said.

"He wouldn't have an enemy in the world."

He always volunteered to help install banners and flags along Alexandra's main street to mark various festivals and holidays.

"That was the kind of thing he did. He was one of those guys that just quietly got on with things and didn't make a fuss," Mr Pratt said.

Mr Steel was born and raised in Alexandra. Friends said he was a loyal family man and extremely popular in the community.

Spokesmen from both the Electricity Engineers' Association and the Electricity Networks Association said they would be "keeping a close eye" on the findings of the accident investigation. The networks association represents lines companies throughout the country while one of the roles of the engineers' association is to work with the electricity industry on safety issues.

Although he had few details, generally there were no "hard and fast" rules about the installation and maintenance of power poles because of the number of variables involved, but the topic was well-covered in industry safety guidelines.

Pole installation was covered in the design phase of a project and depended on many variables, ranging from what type of pole and what sort of line it was through to where it was located and what kind of soil the poles were placed into.

"Poles have been around for 100-plus years and there are good procedures in place."

Mr Berry said it was not unusual for a lineman to be working alone.

"It is fairly common in our industry and the companies put in place processes to ensure the staff are monitored if they are out on the job on their own."

"It's always awful when something like this happens, " he said.

"It is a dangerous industry by its very nature, with people up ladders and tall poles, but a huge effort is put into trying to protect our people."

The Department of Labour would not comment on any specific details of its investigation, a spokesman said.

The department sent an inspector to the scene of the accident on Thursday.