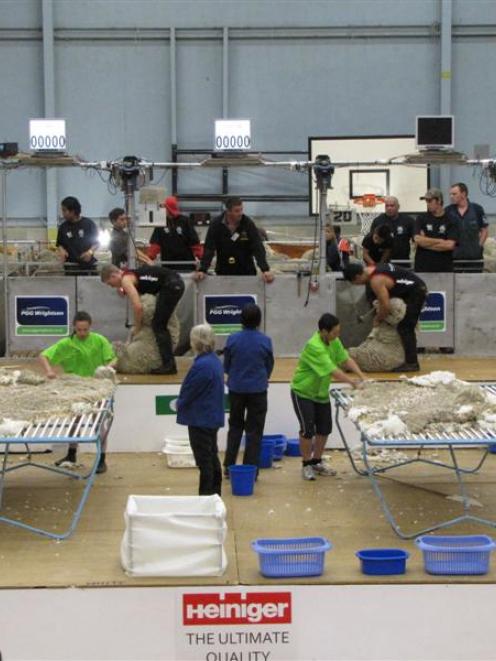 Photo by Sarah Marquet.
Woolhandlers Stevie-Rae Alexander (left), of Taihape, and Robyn O'Donnell, of Masterton, compete in the junior woolhandling semifinals during the New Zealand Merino Shears in Alexandra yesterday.

The competition started at 7.30am yesterday in Molyneux Stadium with almost 100 people from around the country taking part in the heats and semifinals of the junior, senior and open woolhandling classes, team events and senior shearing heats.

With about 1400 sheep needed for the competition, New Zealand Merino Shearing Society president Mervyn Kinaston said it was great the good weather was holding out.

This evening, the country's top shearers and woolhandlers will take to the stage in their respective finals.

A transtasman challenge will also take place between the New Zealand team of Tony Coster, of Rakaia, and Chris Vickers, of Palmerston, and the Australian team of Damien Boyle and Mark Buscombe.

Boyle has won the open shearing class for the last three years, a record for the competition, and will be trying for a fourth consecutive win.

As well as shearing and woolhandling entertainment, a wool fashion show will take place.