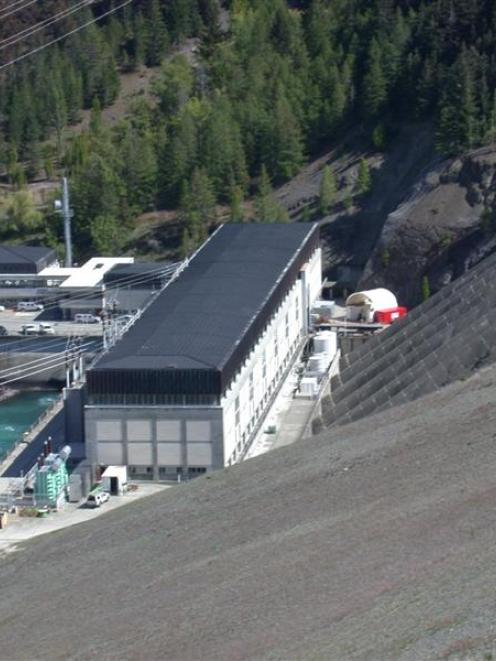 The Benmore powerhouse is undergoing a $67 million refurbishment and upgrade by Meridian Energy Ltd which will improve its efficiency and produce more electricity. Photo by David Bruce.
How do you upgrade a 43-year-old powerhouse? David Bruce went to the Benmore power station to find out.

Cheek plates, wicket gates, thrust guard bearings and head covers - it's a whole new language for the layman when it comes to spending $67 million to refurbish and upgrade the Benmore power station.

Compare that $67 million to the $62 million total cost of the Benmore project, including its 822m-wide and 360m-high earth dam, when it was officially commissioned on May 15, 1965, by then prime minister Sir Keith Holyoake for the New Zealand Electricity Department.

Its present owner, Meridian Energy Ltd, is undertaking the first total refurbishment and upgrade in 43 years.

That will increase the power station's output, as well as making sure it is reliable, provides the best performance possible, is cost-effective and ensures the asset lasts for generations to come.

It will also improve Benmore's integration with wind power projects Meridian is planning in the South Island.

At the time, Benmore was the biggest project undertaken in New Zealand by the Ministry of Works and, at that time, was one of the largest dams in the southern hemisphere.

All six turbines, which generate up to 90MW each, will be back producing electricity by December 2010.

Some work not part of the powerhouse upgrade will continue after that.

It is a mammoth and complex job, employing an average of 40 to 50 on site each day under the project direction of Alan Bulling and Associates.

The main contractor is Transfield Services and there are four subcontractors.

The Benmore upgrade is part of Meridian's ongoing programme to refurbish its core hydro assets and get the best out of them.

Work started at the beginning of this year and so far has included upgrading the two cranes in the powerhouses used to lift and dismantle the turbines - some parts weighing up to about 220 tonnes - to specifically designated areas within the powerhouse.

When the Benmore power station was built, areas of the floor were specially strengthened to take the weight of various components of the turbines.

Now, work has moved on to upgrading and improving each of the six turbines which generate the electricity.

As each one is taken out of commission to be worked on, that will still leave five machines to continue generating electricity.

Most of the major work is being done on site, with some pieces shipped to outside contractors.

The first turbine, machine 5, has been dismantled from the pit in which it sits.

It will take about five months to complete the refurbishment and upgrade, then two weeks to run it in and check it.

Once the first turbine has been completed and is commissioned, lessons learnt from that will be applied to the remainder and the process will speed up, taking four to 4 months.

Once completed, the turbines will use 5% less water to generate the same amount of electricity before the upgrade.

That will add about 70GWh a yearin generation production to Benmore's current 2200GWh - enough to power up to 8750 homes, through more efficient turbines with the latest technology.

The work on the turbines is a mixture of maintenance, refurbishment and incorporating the improvements in technology that have been made in the 43 years since Benmore was commissioned.

As well as increasing the generating capabilities, the work will also resolve cavitation problems that have existed since they were installed.

That will end the two to three weeks maintenance needed on each turbine and reduce the amount of time they were not available to generate.

This is the first major upgrade since the early 1990s, when three machines were overhauled.

Equipment and parts have come from all around the world for the project, from as far away as Japan, Jakarta and France.

In addition to the work on the turbines, other work is being carried out to improve the efficiency and operation of the power station.

That has included two new switchboards, each capable of running with the six turbines.

The two previous switchboards, installed when the power station was built, could only handle three turbines each.

If one switchboard went down, or was taken out for maintenance, Benmore lost half of its generating capacity.

Another improvement involves modifying the output of the station by Meridian installing its own 225MW transformer and a new transmission circuit between the power station and Transpower's switchyard.

The new transformer is due to arrive at Benmore next month.

That work will give greater flexibility to Meridian for transmitting electricity from Benmore while at the same time meeting Transpower's demands.

Once Benmore is completed, Meridian will move on to upgrading other power stations, including the Waitaki River's first power station, Waitaki, commissioned in 1934, and Tekapo A and B.