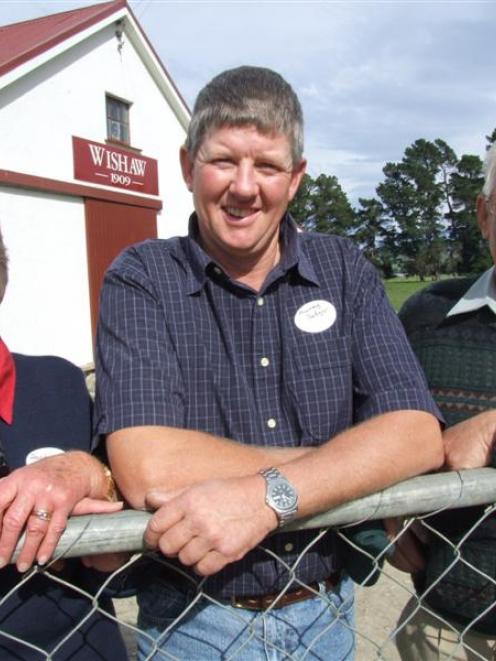 Daphne, Murray and David Rodger celebrate 100 years of their farm, Wishaw, being in Rodger family ownership. Photo by Sally Rae.
The Rodger family celebrated 100 years farming at Kauru Hill, in North Otago, at the weekend.

What makes the milestone more special is that the Rodgers are the only family still farming a property on what was originally part of the Kauroo Hill run, a century on from the ballot for the land.

There were 670 applications for the 30 properties in the ballot "so we're lucky to be here", his grandson, also David Rodger (70), said on Saturday.

Born in Scotland in 1870, David Rodger sen was brought up on his father's farm and came to New Zealand, via Australia, in 1888.

He first worked in North Canterbury then at Totara Estate in North Otago, before moving to Kauru Hill where he lived for 33 years.

He was a Waitaki County councillor and president of the North Otago A and P Association.

His son, Robert, farmed the property, called Wishaw, for 20 years, before Robert's son, David, bought it in 1962.

Additional land has been purchased and David Rodger, his wife Daphne and their son Murray now farm sheep and beef on about 546ha.

The Otago Daily Times 100 Years Ago column said the Kauroo Hill estate was known as one of the best in North Otago for wheat and wool-growing.