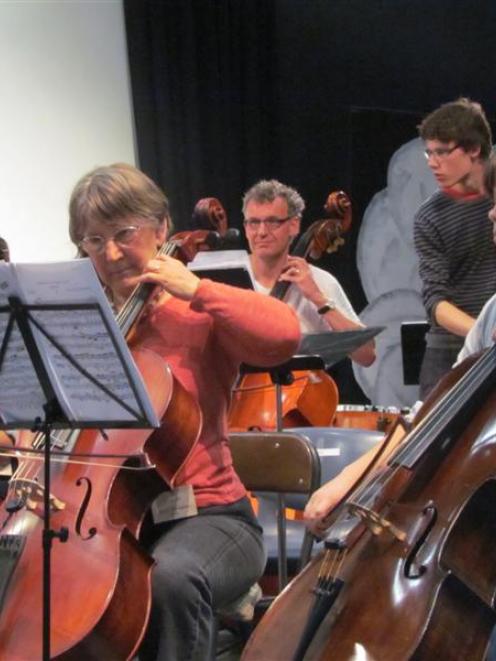 John Roxburgh (left) and Kathy Thompson, both of Dunedin, and Jordan Renaud (17), of Christchurch, get to grips with Tchaikovsky at the Waitaki Summer Music Camp. Photo by Andrew Ashton.
Over the past 17 years the annual Waitaki Summer Music Camp has built up a reputation as a ''definite'' must-do for budding classical musicians, and although this year it has again attracted scores of keen musicians from around New Zealand, only four musicians from Oamaru turned up.

Musicians from the New Zealand Symphony Orchestra and Southern Sinfonia were among the instructors at this year's camp, and although the camp was seen as a ''definite place to be'' for many people serious about classical music, there had been a poor uptake from Oamaru.

''There are Aucklanders here and all the way down to Invercargill and every place in between. There are people from just about everywhere, but we don't often get a lot of Oamaru people, if only because doing it in Oamaru means coming back to your own school in the summer holidays.''

The quality of instruction available and the high-spec facilities at the high school auditorium were big draws for those musicians who attended the camp, he said.

''There are very few school auditoriums as good as this anywhere.''

Camp members would gain a range of tips to improve their playing skills, before performing in small groups in a gold coin donation concert at the Oamaru Opera House on Friday at 1.30pm, before the final full orchestra concert at the high school auditorium at 7.30pm on Saturday, he said.

The highlight of the final concert will be Tchaikovsky's Symphony No 6.