The three district councils bordering the Waitaki River oppose the Government's plan to force Meridian Energy to hand over its two Tekapo power stations to Genesis Energy, fearing it poses significant risk to their communities' futures. 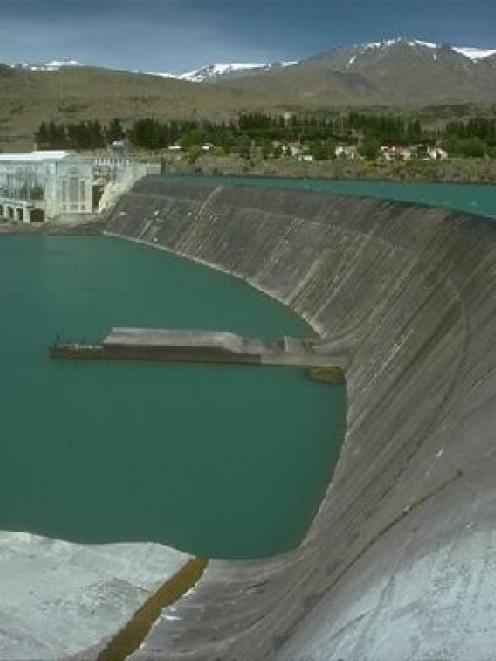 The Waitaki Dam on the main stem of the Waitaki River generates about 960 gigawatts of electricity a year. Supplied picture.
All three want one operator to own all of the Waitaki system.

The Electricity Industry Bill, which will be considered by Parliament's finance and expenditure committee, proposes Genesis owns the Tekapo A and B power stations and canal, at the start of the Waitaki River hydro-electricity generation system which is, at present, wholly owned and operated by Meridian.

Now the Waitaki, Waimate and Mackenzie District Councils have joined that criticism, also concerned about the effect the plan would have on their communities and on water management, particularly irrigation.

Mackenzie Mayor John O'Neill said hydro development had a profound effect on his district, the prosperity of which was based on farming, hydro-electricity and tourism.

"While the goal of providing a better deal for electricity consumers is a noble one, this council believes the solution chosen may have risks and costs that have not been fully assessed."

Mr O'Neill was concerned about irrigation, along with agreements with Meridian on issues, including the effect of lake levels on Tekapo, lake shore management, canal road access, support through Meridian's community fund grants and controlled spills.

A separate agreement had been reached with Meridian to provide water to the Mackenzie Irrigation Company and he questioned whether it would be affected.

He said his council went gone through a long court hearing and negotiations with Meridian over the rates liability for its hydro assets and did not want to revisit the issue.

Waimate Mayor John Coles found it difficult to see how competing generators on the Waitaki could strategically and sustainably manage water from Tekapo to the sea.

"The issue of reliability of water for irrigation is so very important to our district and we do believe this is better managed by a single operator," he said.

Waimate had a positive relationship with Meridian and welcomed its future investment through the proposed $1 billion north bank tunnel scheme.

Mr Coles questioned whether electricity prices would drop, saying merely changing ownership of an asset did not necessarily change anything else.

Waitaki Mayor Alex Familton believed transferring ownership of the Tekapo power stations did not make practical sense in terms of the most efficient and effective use of the integrated Waitaki generation system.

That was best achieved with one operator.

"We are concerned at the potential this proposal could have in reducing the reliability for our irrigation schemes which contribute significantly to the local and national economy," he said.

Control of Tekapo A and B was critical for managing the total Waitaki catchment and should remain with one operator.

"There appears to be significant risk in proposing an ownership split, and our community's preference is for the assets of the Waitaki generation system remain with one integrated operator," Mr Familton said.