Last-ditch bid to save altar 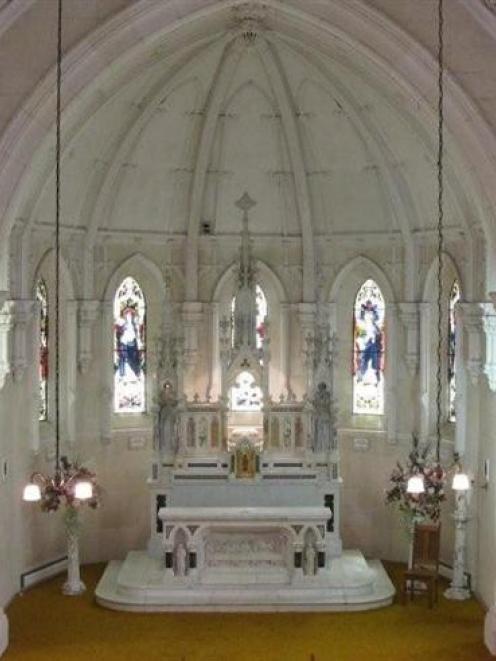 The Otago Daily Times understands work to dismantle and remove the altar will start on Monday. The work could take up to three weeks. It will then be installed in Dunedin's Holy Name Church.

Yesterday, Oamaru writer Nathalie Brown, who has been seeking support for the altar's retention in the chapel, said she was going to contact as many people as possible and ask them to barricade the chapel.

Ms Brown, who has organised a public meeting in Oamaru next Friday, wants the Dominican Sisters, who own the chapel's contents, to postpone the removal to allow for an alternative plan.

Susie Scott (nee McCarthy), whose grandfather Peter McCarthy gave a 28-bedroom house and 10ha at Teschemakers to the Dominican Sisters in 1911, and a further 40ha in 1918, said the decision to go ahead with the removal was "shameful". The Sisters had not listened and had not given people an opportunity to come up with a different plan.

Waitaki Mayor Alex Familton said he and others had been doing what they could , behind the scenes, to talk to the "proper people" to change the outcome.

He confirmed he had been talking amicably to the lawyer for the Dominican Sisters "on possibilities, if they at this stage exist". There was a "great depth of feeling" and he knew a lot of people wanted to halt the removal.

The Dominican Sisters were entitled to move the altar, as they owned the chattels in the chapel. They saw it as going from a place that was seldom used, to a place where it would be used frequently, Mr Familton said.

On the other hand, there were locals who saw its removal as "almost a tearing out of the heart of the building".

Mr Familton still had hopes that the issue could be discussed further.