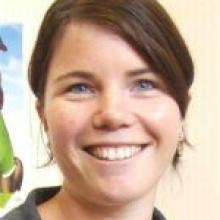 Originally from Oamaru, she was educated at Waitaki Girls' High School and completed a bachelor of consumer and applied science, in human nutrition, at the University of Otago, followed by a postgraduate diploma in dietetics.

She has spent the past two years working as a clinical dietitian at Hawkes Bay Hospital. It was very interesting working in a hospital environment, she said.

The Sport Waitaki job appealed as it was "doing something a bit more positive" - keeping people out of hospital by encouraging active lifestyles - rather than seeing them when they were already sick.

It was also an opportunity to move back to her home town and work with the community.

"It just felt like time for a change," Miss Bee said.

This week, she has been in Dunedin meeting Sport Otago staff and also making contacts in the Oamaru community. That job was made easier having grown up in the town.

She expected it would take a while to get her head around exactly what needed to be done. She wanted to look at what Mr Johnston had done and make sure none of his good work was lost, along with seeing if there were any other areas she needed to focus on.

She expected to be doing quite a lot of work in schools which she was looking forward to. She was also keen to draw on her nutrition experience, if there was a need for it.

She liked to "give things a go" and ran the Rotorua marathon last year. She is playing netball for Athletic this season and she also plays social touch and goes to the gym.