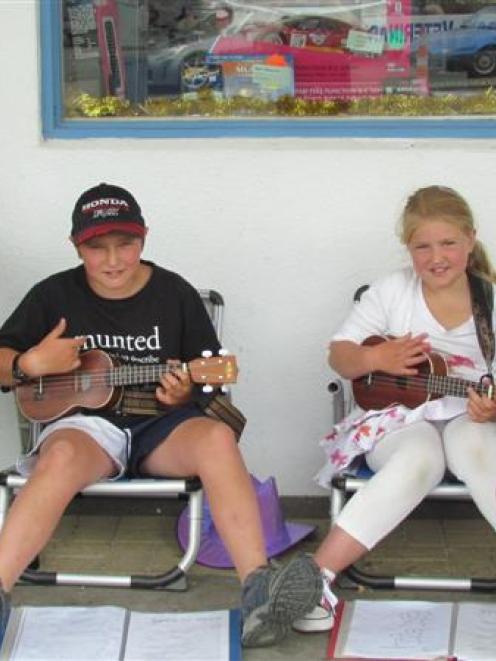 Bailey (left) and Lochie Templeton, of Kurow, enjoy refreshments as Hunter (10) and Katy Tyrrell (8) earn a crust at the Kurow Market Day on Saturday. Photo by Ben Guild.
The young gang grinned under the awning of the last shop at the southwestern side of Bledisloe St, as their leader confessed to pulling a swift one on the people of Kurow.

Hunter Tyrrell, of Kurow, his sore strumming fingers soothed by a recently acquired milkshake, admitted to adhering to the age-old busking tradition of hiding money to appear less successful.

The true yield of his and sister Katy's efforts drooped metres away - in the jangling pocket of an associate. Katy reckoned she made significantly more than $64 at the event last year.

Committee member Graham Hill, of Kurow, credited local policeman Craig Bennett for working with authorities to co-ordinate the closing of a small stretch of SH83.

Planning for the annual market, which began in 1988, had taken months, Mr Hill said.

About 40 stalls sold everything from clothes and jewellery to fresh produce, chutneys and second-hand goods.

It was hard to judge the size of the crowd against previous years due to its transient nature, Mr Hill said.

Planning committee member Pam Currall, of Kurow, was another praising the decision to return the market to the main street.

She was "absolutely happy with the turnout" and said local people and businesses were thrilled after having staged the successful Kurow Races and market day on successive days.