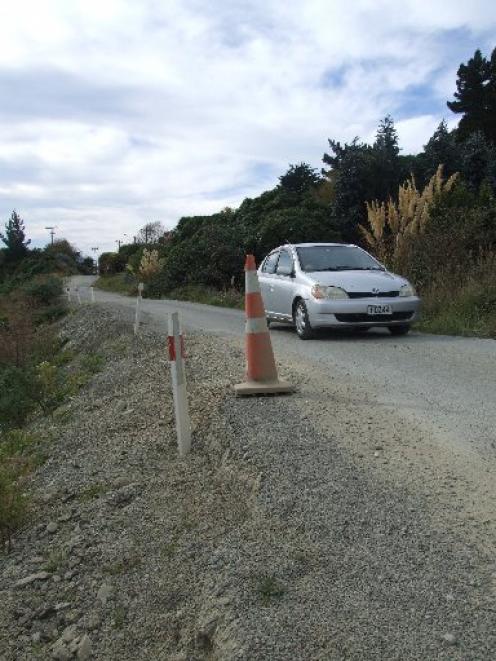 The "Haven St hole" at Moeraki illustrates the township's slip problem. Photo by Bill Campbell.
Problems with the Moeraki landslip remain unresolved, five months after properties were placed in a natural-hazard red zone, prompting locals to call for a public meeting to explain the future of their properties.

It is believed more than 70 properties, including building sections, at Moeraki have been red-zoned due to erosion and land subsidence.

A draft red zone showing properties where a natural hazard has been identified was prepared by geotechnical firm Tonkin and Taylor and the Earthquake Commission.

Moeraki resident Maurice Corish told the Waitaki District Council long-term council community plan meeting this week locals wanted the council, Tonkin and Taylor and the commission to tell them who in the future would give building permission for the red-zoned land.

The council did not seem to realise how serious the Moeraki landslip issue was, Mr Corish said, and a public meeting should be held at Moeraki to explain the situation.

He wanted the situation resolved in "an amicable way", instead of people being forced to take action. Waihemo Community Board chairman Rod Philip has offered to meet Mr Corish to discuss the issue.

Boulders rubbish: The amount of rubbish in the Moeraki Boulders public car park, off State Highway 1 between Palmerston and Hampden, has been described as "absolutely disgusting" by community board member Jack Lyford.

It was strewn all around the car park and under nearby bushes and there was a stench in the area, as well, he said.

Hampden resident Bent Jansen told a long-term plan meeting that rubbish bins at Hampden and Moeraki frequently overflowed and there was no rubbish bin at the Moeraki Boulders car park.