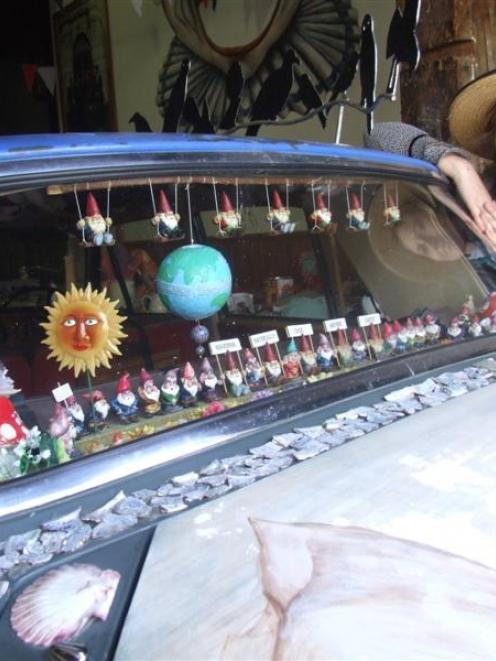 Donna Demente with the art car she is redecorating. Photo by Sally Rae.
With a back window full of gnomes, toy cars on the bumper and a ceiling covered in stuffed toys, Donna Demente's latest acquisition is not your usual car.

The transformation of the 1965 Vanden Plas Princess into an art car was managed by the Moving Arts Group Trust, led by Henry Sunderland, in Christchurch, with various artists working on the project.

It was created in the front gallery of the Canterbury Centre of Contemporary Art and presented to Christchurch's then mayor, Garry Moore, in 2000.

Having had its "life span" in the city, the car went south to Oamaru on the provision it continued to be decorated.

Ms Demente, an artist, is relishing the challenge and has plans to turn it into "Oamaru's civic wagon".

She intends covering every available space on the car and has already added "locally relevant logos", which include the Mosgiel Civic Coven of Conjurers and Sorcerers, Pruden's Tauranga Cockroach Exterminator, the Chelmer St Clumsy and Forgetful Geniuses League and the North Otago Poseurs Union and Idlers Association.

The back window is filled with gnomes and Ms Demente has appealed for donations of toy Smurfs to "balance things up".

A creation by sculptor Bing Dawe, made from fly-spray cans, will be installed on the front to stop bugs getting on the windscreen.

All types of ornaments are studded over the car, even wine corks and coins, and Ms Demente added to the collection by buying 50c ornaments from the Salvation Army shop.

The interior has carved wooden panels, along with the ubiquitous fluffy dice.

While the car was very funky, it also drove "beautifully" and its "virgin voyage" would be accompanying the national penny-farthing tour, which left Manapouri on Sunday.

It would then be used for "just poncing around town", she said.

Once completed, a launching ceremony for the car would be held and the ACC - Art Car Crew - similar to a pit crew, would be established.