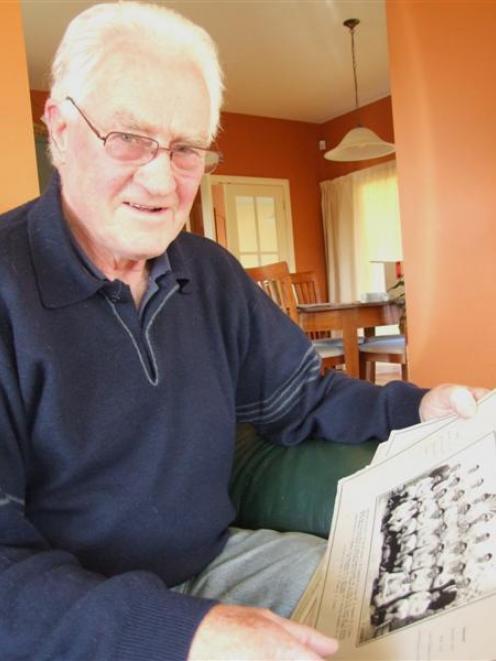 Doug Grant looks over some of his old rugby photographs at his Oamaru home yesterday. Photo by Sally Rae.
Doug Grant knows all about playing in a Ranfurly Shield challenge.

Mr Grant (73) - the first to play 100 games for the North Otago senior representative team - lined up against Canterbury in a shield challenge at Lancaster Park on August 21, 1971.

Five members of the Canterbury pack were All Blacks or were to become All Blacks: Alex Wyllie, Jake Burns, Tane Norton, Alistair Hopkinson and Hamish McDonald.

Canterbury took the game 14-0 after leading by just 6-0 at halftime.

Yesterday, Mr Grant described it as "just another game". Having represented North Otago between 1957 and 1971, missing "a year or two" with injury, he had played many games.

Several highlights of his playing career were beating Australia 14-13 in 1962 - "It took us about a week to get over it" - and being part of a combined North Otago, Mid-Canterbury and South Canterbury team which played the British Lions in 1966, losing 20-12.

Mr Grant, who will watch North Otago's Ranfurly Shield challenge against Southland on television tonight, said players had to be "tuned up" for every game when playing representative rugby.

Still a keen supporter of both the Maheno club and North Otago, he had not seen North Otago train this year so was not able to make a prediction for tonight's score.

Much had changed since Mr Grant's rugby-playing days and today's players "don't know how lucky they are".

He recalled playing a Citizens Shield [North Otago club rugby] semifinal on the Saturday, travelling to Rangiora that night, playing Marlborough on Tuesday, Nelson on Thursday, Golden Bay-Motueka on Saturday, Buller on Wednesday and the West Coast on Saturday.

He remembered his first bus trip to Invercargill with the North Otago team, which left Oamaru at 8.30am and did not arrive in Invercargill until about 6.15pm, having only really stopped for lunch.

Mr Grant also played club rugby for Maheno throughout that period. One year, his team won the Citizens Shield and the couple used the shield as a fireguard for a season, because they did not know what else to do with it.

On Mr Grant's retirement, aged 35, a newspaper article said he would undoubtedly be renowned for his sportsmanship.

"He played the game hard; he never gave an inch. Yet after the game there was always the ungrudging Grant mixing amicably with the opposition."