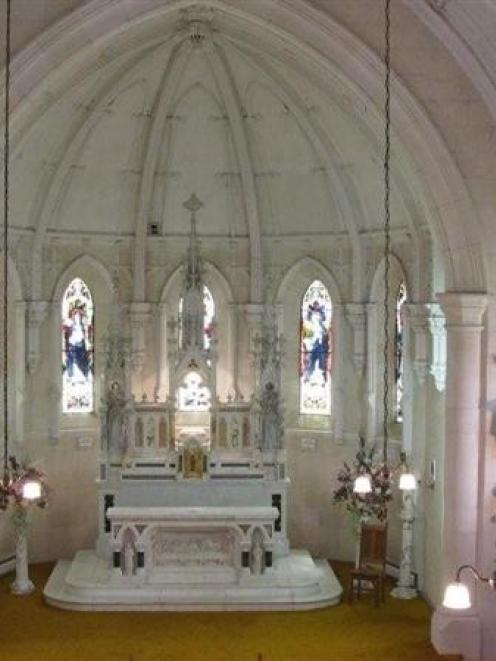 Mediation was held in January between Fr Mark Chamberlain, of Holy Name Parish, who wants the marble altar moved to Holy Name Church in Dunedin, and Susie Scott, who wants it retained in the chapel.

They agreed to an adjournment and mediation was due to be reconvened this week.

Ms Scott was advised last week that it had been called off.

"They [Holy Name] wanted to take it, we wanted it left. There is no middle ground and that's the shame of it," she said yesterday.

The altar was to have been removed last August and transferred to Holy Name Church.

Ms Scott successfully applied for an interim enforcement order from the court which meant work could not start and resource consent must be obtained from the Waitaki District Council.

Fr Chamberlain then filed an application to set aside the order.

The altar was given to the parish by the Dominican Sisters, who own the contents of the chapel.

Ms Scott was "really disappointed" a solution had not been reached but hoped it could still happen.

She appealed to Fr Chamberlain to reconsider, saying the next step was taking the matter to court at "enormous" expense, but she was not prepared to give up.

That next step would involve contesting the lifting of the interim enforcement order which, at this stage, remained in place.

In light of the devastation caused by the Christchurch earthquake and heritage buildings being reduced to rubble, she questioned spending such a large amount of money, saying it would be better spent on restoring and protecting the building.

The new owners of Teschemakers, John and Joy Murdoch, hoped to use the chapel as part of a wedding venue and they would be devastated if the altar was removed, Ms Scott said.

When contacted, Fr Chamberlain said it would be inappropriate to comment as the matter was before the court.

There had been no direct appeal from Ms Scott about any reconsideration and the only information the parish had was from her lawyer confirming the most appropriate step was to resolve it through the court, he said.