Revival thanks to sprinter 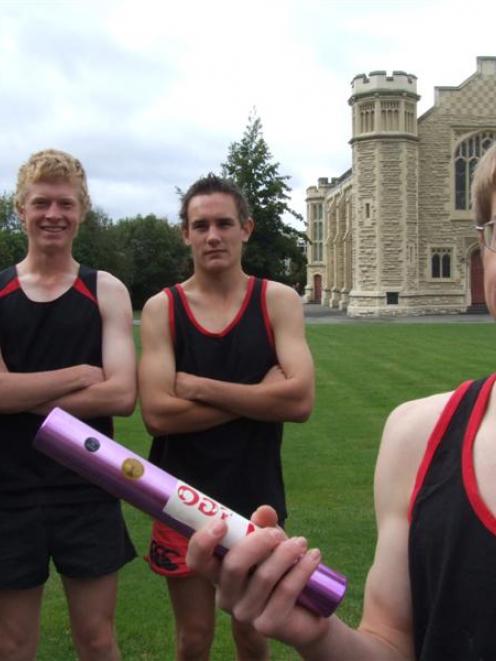 Blair Grant (14, holding baton) with his Waitaki Boys High School 100m relay team-mates (from left) Dean Fenwick (14), Michael Burgess (15) and Chris Weily (14), who were successful at the South Island secondary school athletics championships. Photo by Sally Rae.
Waitaki Boys High School is going through a revival in its athletics fortunes - largely due to the efforts of young sprinter Blair Grant.

The school's sports co-ordinator, Jan Kennedy, said it was a long time since the school had won three titles; possibly since the mid 1980s.

Blair's time of 23.53s in the 200m was his best time yet, although his 11.59s in the 100m was just a little slower than his best of 11.5s, which he achieved at the Aoraki secondary school championships.

Mrs Kennedy said Blair, who began training only this year, was "naturally talented".

She recalled seeing him competing at primary school athletic sports and blitzing the field in the 100m.

"Everyone there thought: 'Yeah, this guy can run,"' she said.

Blair and his team-mates will take a break over winter, concentrating on rugby, before preparing for the national secondary school athletics champs in Timaru, in December.

Blair is aiming for top-three finishes there.

Waitaki Boys was hoping to take a large team to the champs, the first big team in a long time.

The school was strong in the sprints, and improved over middle-distances, Mrs Kennedy said.