Season in Waitaki Valley is 'shaping up quite well' 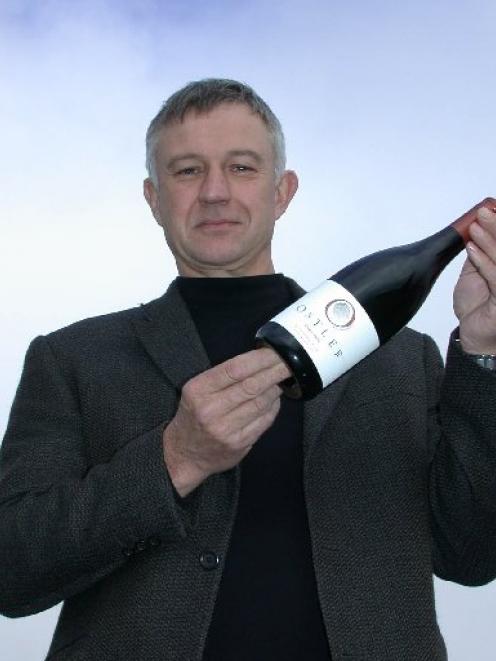 Dr Jim Jerram in 2007 with Ostler Vineyard's first pinot noir, from its vineyard in the lower Waitaki Valley. Photo by David Bruce.
It has been a challenging season for Waitaki Valley winegrowers, but the talk is about quality, not quantity, David Bruce reports.

Cool and wet weather from late January will have an effect on the quantity of grapes picked in the Waitaki Valley this season, but quality of the wine is expected to be high, Waitaki Valley Wine Growers' Association chairman Jim Jerram predicts.

"The season is now shaping up quite well and we think it will be a good-quality year," he said.

The season all along the east coast from Waiheke Island to Otago has been a difficult one.

The hot weather from Christmas through early January turned to cooler conditions from January 19, leading into one of the coolest February months on record.

Weather in early December had affected flowering, which also had an effect on yield.

Yields were lower than average.

But the valley usually had good autumns, and this had been the case this year with "marvellous days" for the past two weeks and temperatures in the low 20s.

"We have always relied on our Indian summers and, to our great relief, about two to three weeks ago it cleared up and we have been having these warm, still days," Mr Jerram said.

Picking would probably be about two weeks behind average.

Mr Jerram is due to start picking his first grapes, a pinot gris from his Ostler Lake Waitaki vineyard, in about two weeks.

It is one of the earliest sites to start picking in the valley.

He said he expected other growers, with about 130ha planted in the Waitaki and Hakataramea Valleys, would face a similar situation.

However, so long as the good autumn weather continued and the grapes ripened properly, lower yield could mean more concentrated flavours and quality wines from this year.

"I'm expecting something pretty special this year," he said.

Normally, most harvesting would be finished mid to late May, but it had been known to go into early June for late varieties in late seasons.