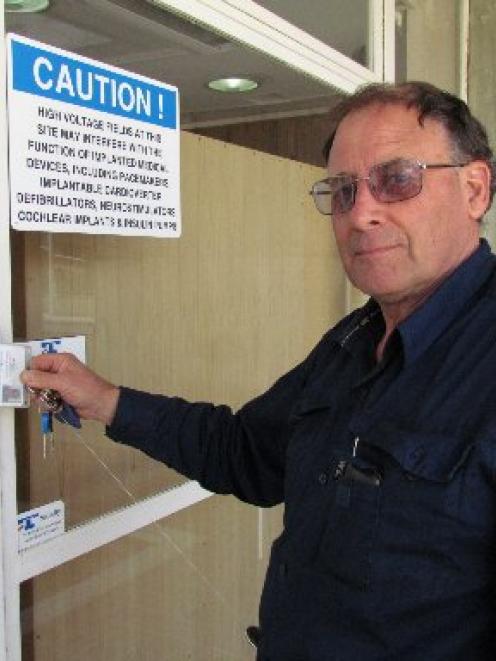 John Sturgeon clocks in for a solo stint looking after the Waitaki hydro dams over the new year. Photo by Andrew Ashton.
While most people take the chance to get away from it all by taking a camping trip over the new year, a Hakataramea engineer will have the sole responsibility for keeping three of New Zealand's largest hydro-electric power stations ticking over.

Meridian Energy mid-Waitaki electrical supervisor John Sturgeon, who will be the only person on duty at the energy company's Waitaki, Aviemore and Benmore power stations over the new year holiday, said that would involve running station checks to make sure the power stations were working well, checking on any faults and alarms, and running station security.

He would also have to check on the running of the spillway if it was put into action and ensure turbines were well-oiled and running at correct temperatures.

The power stations' output was controlled remotely from Wellington, but he said ''hundreds of things'' could go wrong if there was not someone available to deal with things in person before they got out of hand.

''Even though they are totally controlled from Wellington, we still need people on the ground to take care of the day-to-day running of the stations and the generators,'' Mr Sturgeon said.

Being alone inside such huge structures was ''not too bad'', he said.

''You get used to it. We're dealing with callouts all the time anyway, at night-time and during the week.

''The number of callouts is varied, but we just don't know what we're going to strike.''

He said the unexpected sometimes happened, as it did in 2004 when a jet-boat carrying two people plunged 25m over the edge of the Waitaki Dam.

''It was a few years ago we had a boat go over the side of the dam. It went over the Waitaki Dam, and that was people that were based at Fisherman's Bend below Aviemore.

"Had I not gone in that year that morning, New Year's Eve, those people could have been left stranded on the river for a very long time before anyone saw them.

''So that's why the security of the stations and looking after them is pretty important, because you get a lot of people around.''

A second engineer was on duty for the Christmas holiday week, he said.

On Christmas Day 2012 and New Year's Day 2013, both of which occurred on a Tuesday, electricity consumption dropped by about 20% compared with the Tuesday before Christmas, but Mr Sturgeon said even though most factories were closed for the period, power was still needed.

''You still have around here, at the moment, a lot of irrigation going on and things like that, so the farmers will need it.''

So far, there had not been a major problem with the power generators, but if one had to shut down the generation would be picked up by one of the other stations on the Waitaki hydro scheme, and there would be no question of a power cut.