By Ruby Heyward
0 Comments
It really says something about a community when people will come out in the rain and cold for tug-o-war.

On Saturday, about 50 people gathered at the Enfield Domain to celebrate the 145th anniversary of the town, 12km northwest of Oamaru.

Despite the miserable weather, event organiser Samantha Owles was happy the event could go ahead.

It had originally been scheduled for November 13, but a poor weather forecast saw the even postponed to Saturday — Miss Owles decided it would go ahead rain or shine.

To celebrate, people took part in sack and barrel racing, perused a dozen stalls and played some tug-o-war.

It was no ordinary game of tug-o-war, but an ode to Enfield team that won national championships in 1916 and 1924.

Braving the rain, four tug-o-war teams stepped up to the plate. 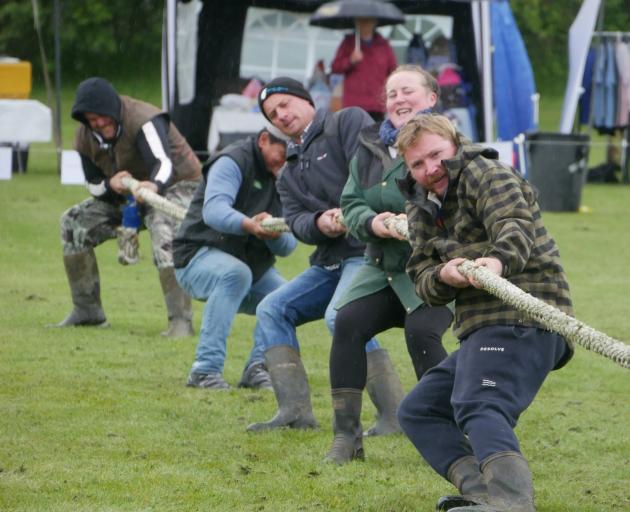 Team members (from front) Blair Jopson, Micayla Brenssell, Mark Geypen, Orlando Ruiz Diaz, and Matt Guthrie won the Enfield Tug-o-War tournament. PHOTO: RUBY HEYWARD
Though there were no direct descendants of the original team present, there were many people with strong ties to the community.

They included Grant Ludemann, whose family had lived in the area for about 100 years.

Though Mr Ludemann was not competing, he had a team, ‘‘EGL Pastoral’’, entered in the competition.

The team of Blair Jopson, Micayla Brenssell, Mark Geypen, Orlando Ruiz Diaz and Matt Guthrie ended up winning the tournament — making a little bit of history of their own.