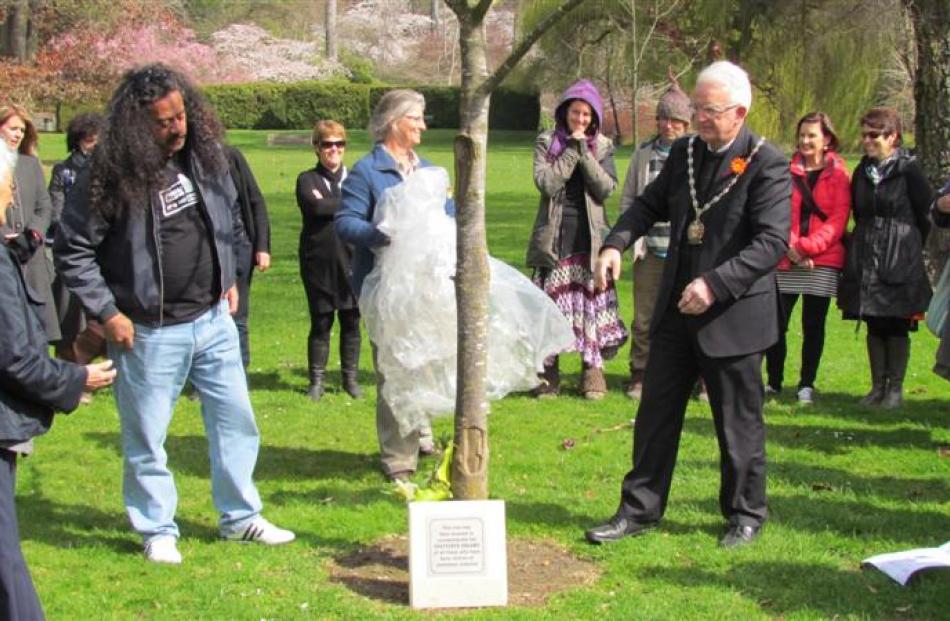 Domestic violence prevention spokesman Vic Tamati and Waitaki Mayor Alex Familton unveil a plaque commemorating the lives of all those affected by violence, in the Oamaru Public Gardens on Wednesday. Photo by Ben Guild.

Seeing a large Polynesian man, tears running down his face, admit to once bashing his 8-year-old daughter with a platform shoe is quite something.

Seeing him do so in front of a crowd of strangers, before helping to unveil a plaque commemorating the life of a woman he had never met, is quite another.

"It's Not OK" campaign spokesman Vic Tamati, who broke a 38-year cycle of violence in his family after the particularly nasty incident involving his daughter in 1992, spoke to about 30 people in the Oamaru Public Gardens on the World Day of Peace on Wednesday.

It was not the first time many of those attending had gathered there.

Fifteen years ago this week, after the brutal murder of Oamaru woman Lyn Hore-Symon by Anthony Hitchcox brandishing an axe, a group of grieving Oamaru people rallied together to express their concern about the length of the sentences being given to violent offenders.

Event organiser and co-ordinator of the Waitaki Community Gardens Annie Beattie, who was close to Ms Hore-Symon, said peace was something which needed to be celebrated more often.

"We need to find ways to celebrate peace; we don't do it often enough.

"I remember the day when Lyn was killed. Someone saw fit to take her life in her own home.

"It takes you to a place you never want to go back to. It's about remembering because we don't ever forget."

The crowd gathered at the Oamaru Community Gardens before walking to the plaque in the public gardens beneath the tree planted 15 years ago to commemorate the lives of all those affected by violence.

It was there Mr Tamati at times struggled to speak.

"I didn't know the person we are here to place the plaque for. But as I walked down here I remembered friends of mine who died violently."

With difficulty, he recounted a one-year period in which seven people he knew died in violent, tragic circumstances.

One died of a heroin overdose.

Another was beaten to death by a white power gang. A third died from sniffing petrol. Others died in violent car crashes.

"I did a lot of violence in my life," Mr Tamati said.

"A lot of violence on my wife and children.

"It's sad, but time to remember it's time to change. I can't start with anyone else but me."

Sadly, he said, the present approach to curbing domestic violence was largely ineffectual.

"A lot of these 16-week programmes don't work ... I'm still a baby in getting my life sorted out," he said.

Waitaki Mayor Alex Familton, who unveiled the plaque alongside Mr Tamati, said the world was a place of great turmoil.

"The great importance of today is to look towards peace in the world.

"But first, we need to find peace within ourselves," he said.

"This memorial for all victims of violence is very appropriate in such a peaceful spot."