Plenty of work to be had in prison 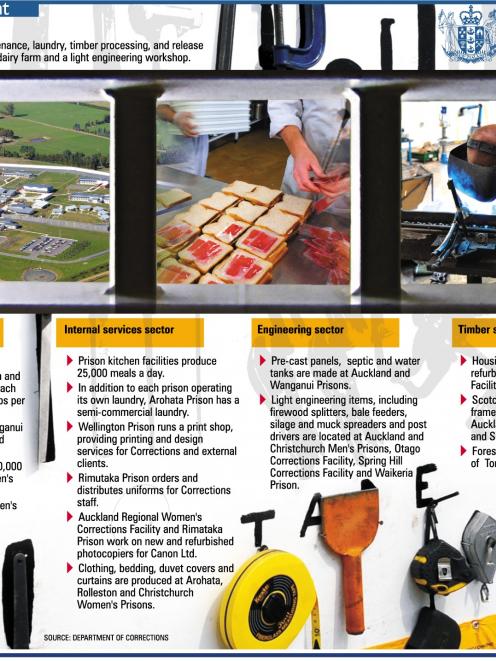 Information released under the Official Information Act by the Department of Corrections shows more than 140 business ventures are operating in prisons across the country.

Corrections rehabilitation and reintegration assistant general manager David Wales said it was the goal of the department to reduce reoffending, and research showed prisoners who found work after being released were less likely to reoffend.

"It is important that prisoners are given the opportunity to not only address their offending while in prison, but to gain skills for in-demand industries which will aid them in securing meaningful employment once they are released."

Prisoners were able to gain skills across a range of industries, and have the opportunity to undertake industry training, with the focus on National Certificate Level 2 and pre-trade qualifications.

CIE industries had a "large number of contracts" with businesses around New Zealand, including Canon NZ Ltd for disassembling and refurbishing photocopiers, selling plants to local councils, making bedding for rest-homes, and selling milk to Fonterra.

Other contract details have been withheld by the department, citing commercial sensitivity.

"The purpose of the CIE prisoner employment activities offered in prisons is to give prisoners the opportunity to learn relevant work skills that will assist them in gaining sustainable post-release employment."

The Otago Corrections Facility, which runs its own dairy farm, employed 14 prisoners, and there was evidence others had secured work on dairy farms following their release from prison.

In addition, some prisoners under the Release to Work scheme had been released on a daily basis to work in paid employment, he said.

University of Canterbury sociologist Prof Greg Newbold said while businesses in prisons appeared to be a good idea, in reality it was difficult to make it work.

A range of factors made it hard running businesses in prison, including a lack of motivation, unskilled workers, difficulty in finding adequate supervision, and prisoners receiving no pay for their work.

There was also the risk of scams, and prisoners who could "wreck complex machinery", he said.

However, despite the risks, those who volunteered for work programme could be eligible for an earlier release and that would work as an incentive for prisoners.