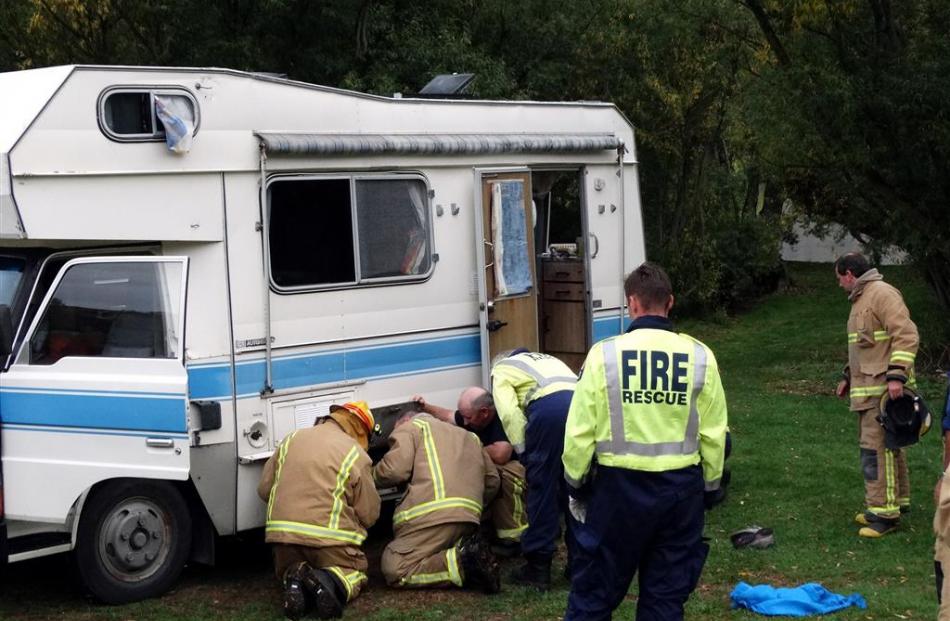 The explosion ripped through the women's 1989 Mazda camper van, blowing out several windows, just after 7pm, at a popular camping area north of the lake.

They had arrived about an hour before and were cooking fish, with two glasses of wine already poured.

Emergency services said the two women, aged 60 and 72, received burns to their faces, hands and feet. A St John spokeswoman said one was in a serious condition and the other had moderate injuries.

They were initially taken to the Lakes District Hospital, Frankton, in two Queenstown ambulances, but were later airlifted to Dunedin Hospital by an Otago Regional Rescue Helicopter. Police said Fire Service fire safety staff would investigate the incident today.

About 10 other camper vans were parked nearby and the occupants rushed to help after the explosion.

One witness, Sharon Peacock, from Warkworth, north of Auckland, said: ‘‘I saw the fire coming out the back first and then I just heard the boom.''

Sergeant Keith Newell, of Queenstown, said the women had burnt arms and faces and were ‘‘very, very lucky'' not to be more seriously injured.

‘‘Quick action by other members of the public assisted them in getting to Lake Hayes only 30m away.''

Sgt Newell praised the other campers, some New Zealanders and others from abroad, who helped the injured women.

‘‘We're very grateful that they did take the action,'' he said.

Witness Helen, a Kiwi who declined to give her last name, said campers rallied round the injured pair - disconnecting the gas bottle, using a fire extinguisher on the smoking camper van and pouring water over the women's burns.

‘‘They were pouring fresh, clean water on them at that stage and then they took them to the lake.''

She described the explosion as a ‘‘big boom''.

The women had both burners on low when the explosion happened, but one of them told her it suddenly seemed there was ‘‘too much gas'' in the camper van.

Mr Peacock, who used his fire extinguisher on the van, said the injured women were ‘‘shocked'' when he got to them.

Fire rescue personnel at the scene declined to comment but it is understood the van's gas bottle was out of date.