Council set to get tough 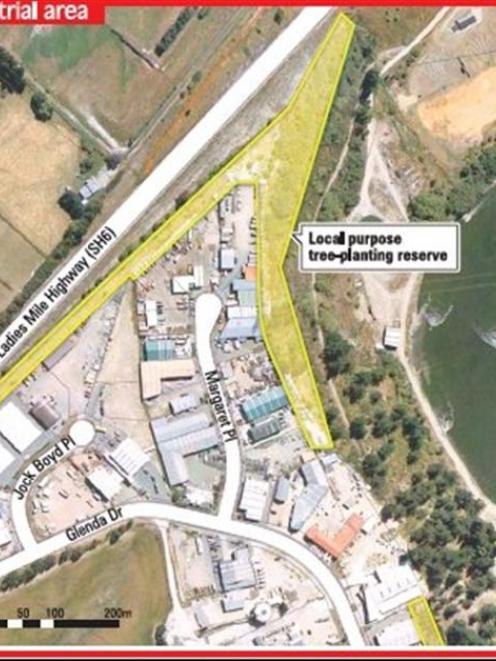 The shaded area shows part of the reserve along the Frankton industrial area, where a fencing notice has already been sent to landowners encroaching on reserve land.
The Queenstown Lakes District Council plans to get tough with landowners who encroach on reserve land.

Several businesses in the Frankton industrial area will shortly be receiving a letter from the QLDC outlining its plan to restore a reserve located between the area and State Highway 6.

But affected landowners need not panic just yet.

The council is giving them 12 months to comply with its decision.

The council intends to create a visual buffer between the Frankton industrial area and State Highway 6.

The area is classified as a "local-purpose tree-planting reserve".

We have to ensure the land is used only for the purpose it was intended for," Mr Egerton told the committee.

In June 2009, a letter was sent to affected landowners instructing them to "cease the use of the reserve for storage parking of vehicles or any other private use".

As no action was taken after the letter, a fencing notice was issued in November informing landowners a fence would be built along the reserve boundary, and the price of $100 per metre would be shared between the council and landowners.

Cr Cath Gilmour asked if it was possible to come to a temporary agreement about the use of the land, until the council was in a position to continue with its intentions to plant trees on the reserve.

"This could be seen as targeting individual businesses, rather than looking at the entire area.

I would rather take a holistic approach, looking at the entire reserve area and all the affected businesses.

We might say we will plant within 12 months, but the council have no money for planting or fencing available in next year's budget," Cr Gilmour said.

Other councillors expressed a reluctance to consider leasing or selling any of the land.

Cr Vanessa van Uden said: "We are the guardians of this land on behalf of the community.

"We should be careful with setting precedents. I cannot support sale or lease of the reserve."

Rather than immediately enforcing the fencing notice, the committee voted in favour of dealing with all potential infringements of the reserve land at the same time, by informing all adjoining landowners they had 12 months to move all property and material from the reserve before the fencing would be carried out.

Mr Egerton said he would inform the affected landowners.

"It will not come as a surprise to those businesses, as I have already spoken to most of them about this matter.

"They will be informed of the committee's decision, and reminded before the 12 months have passed.

"If they still have not cleared the reserve land, a fencing contractor could be called in, and the material would be moved at the owners' expense," he said.