Couple show no fear on world's 'most exciting' jet-boat ride 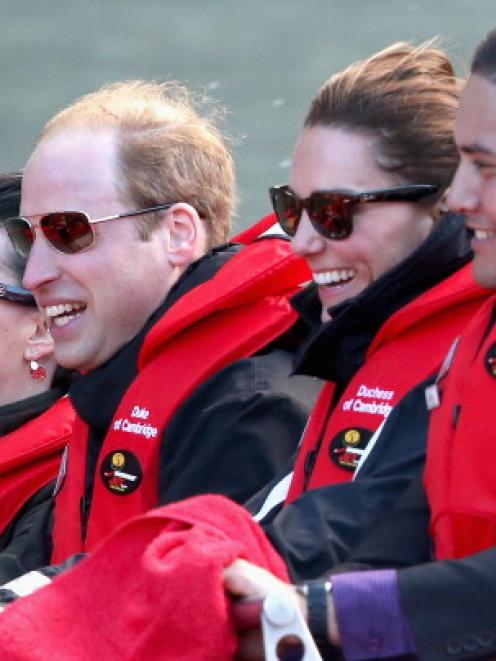 The royal couple 'had a blast' on the Shotover Jet ride, operations manager Wayne Paton said. Photo Getty
Maybe it was the wine from moments earlier.

Whatever it was, the Duke of Cambridge had no fear as he and his wife, Catherine, were taken for a wild jet-boat ride down Queenstown's Shotover River gorges yesterday.

The pair were taken on the jet-boat ride immediately after quaffing some of Central Otago's finest wine at Amisfield.

Shotover Jet operations manager Wayne Paton, who had the honour of driving the Royals on the 25-minute trip dubbed the world's most exciting jet-boat ride, said afterwards: ''The duke was right into the trip. He even asked me a couple of times to go closer to the canyon walls.

The boats can hit speeds of 85kmh in just 10cm of water while skirting perilously close to the gorge rock walls.

Mr Paton - a 13-year veteran of the firm - admitted he had butterflies before the trip.

''... while these are obviously the most high-profile people we've ever had on board, at the end of the day they're customers looking for an amazing adrenaline experience and we treated them just like that.'' 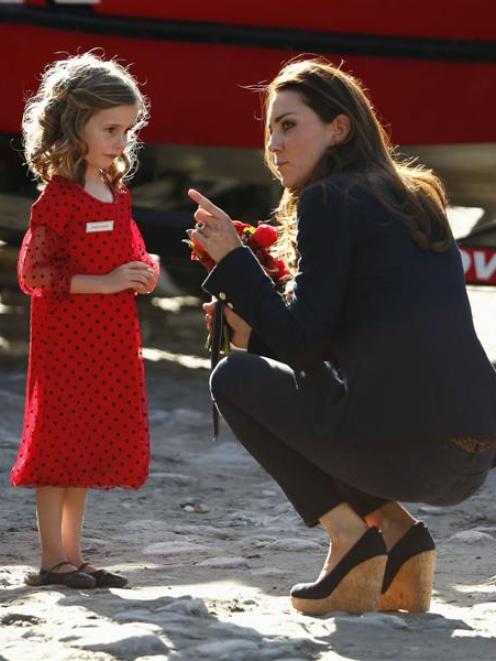 The Duchess of Cambridge receives a bouquet of flowers from Maggie Langford after the jet-boat ride. Photo by Reuters
The 43-year-old talked to the duke and duchess, and other dignitaries on the boat, about how jet-boating was invented by a New Zealander, the river's gold history and pointed out landmarks such as Coronet Peak along the way.

The Royals joined the more than three million passengers who have taken the boat trip since operations began in 1970.

Smiling broadly and somewhat damp, thanks to spray from a series of Shotover Jet's signature 360-degree spins, the couple chatted and laughed throughout.

David Kennedy, southern region manager for Shotover Jet owner Ngai Tahu Tourism, added: ''The duke and duchess had specifically asked to have a trip that was the same as any we offer on a day-to-day basis.

''They enjoyed a perfect Central Otago autumn day for it, with blue skies, sunshine, trees tinged with seasonal oranges and golds and snow-capped mountains in the distance.

''Just like any young couple, they had plenty of questions about how the jet-boats work, the scenery and gold-mining history of this area and the river.

''And just like everyone else, they hung on tight to the heated handrails in front of them when the driver warned them as he was about to go into each spin.''

Fifteen Arrowtown Primary School children chatted to the Royals after their boat trip. The duke and duchess asked who was having a birthday when, what they were going to do for Easter and if they had experienced a jet-boat ride before.

Nine-year-old Jessica MacDonald said she thought Kate ''was dressed beautifully'', while one of the teachers, Janey Winders, said Prince William apologised for not getting to the school eight years ago, due to the weather.

The Royal couple were given books written by the late Arrowtown author Alma Stevenson.