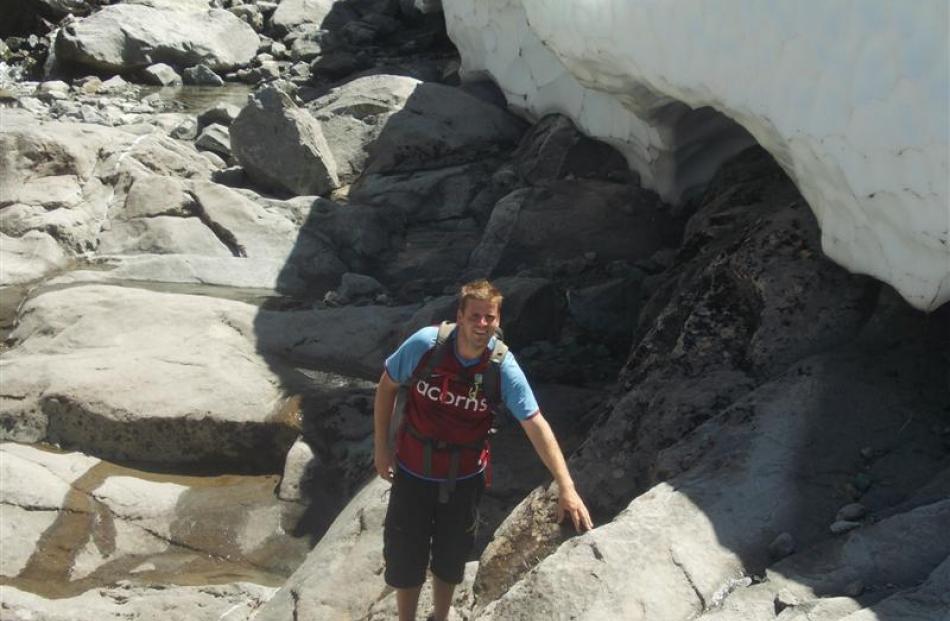 British tourist Philip Bergman, who died during a mountain biking trip on the Pisa Range on Monday. Photo supplied.

The British man who collapsed and died during a a mountain biking trip near Snow Park on the Pisa Range on Monday was a "top bloke" whose greatest passion was mountain biking, according to the friend who was with him when he died.

Tributes were flowing yesterday for Philip Ross Bergman (26), of Weston, Herefordshire, England, who came to New Zealand in September to follow the England team's Rugby World Cup matches and had lived in Dunedin since then.

Mr Bergman and friend John Consitt (30), from Cambridge, UK, were flatting together in Dunedin, and were among a group of 10 people taking part in the bike ride organised by Queenstown Bike Taxis.

The group had been biking for just a few minutes, around 2pm, when Mr Bergman had a minor fall from his bike at an area known as Rock Drop. He stood up and immediately collapsed.

"He started having like a seizure or a fit of some sort ... and it lasted for a few minutes," Mr Consitt said.

Mr Bergman was "struggling to breathe" and fellow cyclists, including Mr Consitt, and staff from Queenstown Bike Taxis carried out CPR on him after calling 111. A medical team arrived by air, but Mr Bergman was declared dead at the scene.

Sport, in particular mountain biking, was Mr Bergman's "passion", Mr Consitt said. He had been loving his time in New Zealand.

"I met him seven months ago in a hostel . . . he was always smiling and got on with everyone. He was just a top bloke."

Another friend, Lori Heinz (29), of Dunedin, described Mr Bergman as a "fantastic guy" who was mad about mountain biking.

"Not too many people get to pass away in the middle of doing something they love," she said.

Queenstown woman Ruby Mann (30) first met Mr Bergman during the Rugby World Cup and the pair tried snowboarding together for the first time. Mr Bergman had enjoyed it so much he had bought a season pass for the Queenstown skifields and was "very excited" about pursuing the sport further this winter.

Mr Bergman had worked for Crown Relocations in Dunedin since October and his employer, Dave Tozer, Crown's Otago/Southland area manager and Dunedin branch manager, described him as a "really popular person" within the company.

"It's been really really hard for everyone here to try and get their head around what's happened."

Those who knew Mr Bergman were not aware he had any pre-existing medical conditions.

"He's always come across as fit and healthy and active," Mr Consitt said.

"He was fantastic and did everything that he could do and he was very professional."

Mr Bergman's father in Western Australia and his mother in the United Kingdom had been advised of his death and were "understandably devastated", Detective Sergeant Derek Shaw said. Support for the British-based family is being given via the British High Commission in Wellington, and Victim Support in New Zealand is assisting local friends.

A postmortem examination on Mr Bergman will be carried out in Dunedin.

The matter is not being treated as suspicious by police and has been referred to the Southern coroner.