During the next 10 days, Queenstown Lakes district residents have the chance to have their say on how the council should prioritise its work and spending over the next 12 months. Henrietta Kjaer takes a look at some of the main issues in the QLDC's draft annual plan.

You can check the rate increase for your specific area in the draft annual plan summary. 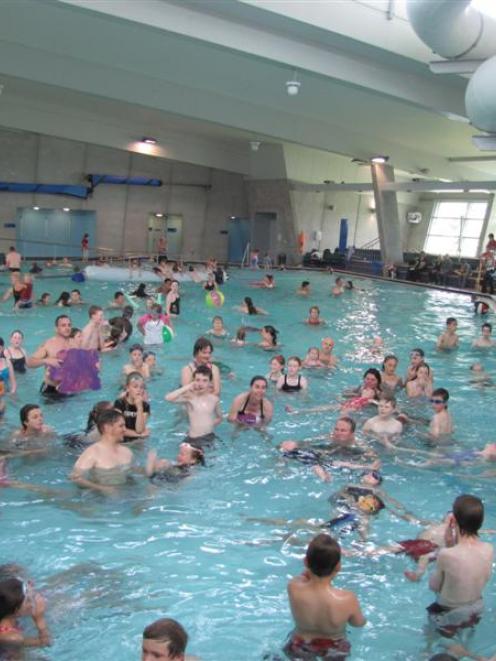 Lower revenue than expected from Alpine Aqualand has added to Lake Leisure's need for additional funding next year. Photo by Henrietta Kjaer.
• Lakes Leisure
The true cost of running Lakes Leisure is $432,000 more than was budgeted in the 2009-10 year.

Lakes Leisure operates and maintains council-owned assets such as the Queenstown Events Centre, Alpine Aqualand, the Lake Wanaka Centre, the Wanaka and Arrowtown Community Pools, the Memorial Hall and the Arrowtown Athenaeum Hall - as well as most of the sports fields in the district.

The council said the actual costs had not been fully understood, as Lakes Leisure had not previously completed a full year of trading and the 10-year plan for 2010-11 had underestimated the actual cost.

Some of the factors contributing to the increased cost include lower than expected revenue from Alpine Aqualand and continuing issues with the fast hydro-slide, which remains closed.

The council also intends to include the following projects in next year's budget:
$350,000 for additional parking, $95,000 to resurface stadium floors, $27,000 to improve lighting in the events centre, and $24,000 to improve fire safety measures at the Lake Wanaka Centre.


• Rubbish
The council has successfully reduced the amount of rubbish in the district dumped at the landfill, which has led to a reduction in revenue from landfill charges.

Council analysts have warned against simply raising the price of rubbish disposal, saying it would create a risk of illegal dumping or disposal outside the district, which would lead to greater revenue loss.

It is proposed to retain the landfill levy at $36 per tonne, but increase the waste management charge from $140 to about $165 for a residential property. This increase accounts for just over 1% of the average rates increase of 7.95%.

The cost of parking at the Ballarat St car park will double (from 50c to $1 per hour with no cap), while a charge of 50c, with a cap of $2.50 per day, will be introduced at the Boundary St car park.

This proposal affects 281 long-stay parks, and the council plans to implement it in July to coincide with new bus services operated by the Otago Regional Council and Connectabus, which includes an express service to Arrowtown and services to Kelvin Heights and Arthurs Point.

The proposed new home for the library is the Memorial St building which housed the Pulse Fitness Gym until the end of last year. Spread over three floors, the new building has 1100sq m, compared with the 700sq m the library occupies at present.

The new facility will include a dedicated children's library and a lending library, along with room for archives and community meeting space.

The space occupied by the library, on the bottom floor of the main council building at Gorge Rd, will be converted into offices for council staff, who are spread over five leased locations.

The combined lease and operational costs of the move are about the same amount as the council will save in rent.

Mr Geddes had said the owner of the new building had agreed to pay for the cost of the library fitting out, but there would be furnishing costs to the council of about $50,000. Converting the existing library into offices is expected to cost $350,000.


• Reserve maintenance
The council regularly takes over the maintenance of new reserve land, either due to new developments, such as subdivisions, or because of an agreement with the Department of Conservation.


• Event strategy
The council's event strategy is due for a drastic cut with a proposal to drop the $50,000 annual funding, with the council saying it already supports events without extra cost to the ratepayer.


• Community grants
Funding for smaller communities is another area in which the council is seeking to cut costs. Until this year, communities could apply for project funding of up to $5000 from an annual pool of $50,000.


• Aspiring Arts Trust
The council proposes to drop the annual contribution to this trust.


• Regulatory legal and insurance costs
Legal costs relating to resource consents and appeals have marred the council over the past year, and the council believes it will require an additional $300,000 next year.

The council also has three outstanding leaky homes insurance cases, and while it has insurance for these matters, there is still an excess of $50,000 to be paid for each case.

In addition, the council is required to contribute $102,000 to the Local Government Risk Pool, which was not taken into account in the 10-year plan.

> All ratepayers and residents can have their say on the draft annual plan, which is open for submission until May 17. The full document is available on the council website with a summary, and at the council office or at the libraries.

Submissions must be in writing and can be sent to the council at http://www.qldc.govt.nz/home/forms/draft-annual-plan-submission-form/, email services@qldc.govt.nz, fax (03) 450-0448 or posted to Queenstown Lakes District Council, Private Bag 50072, Queenstown 9300.