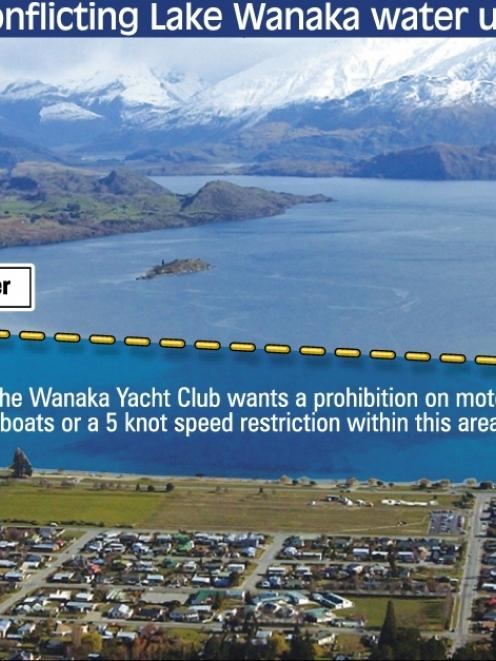 Continuing conflict between Lake Wanaka users has prompted the Wanaka Yacht Club to suggest that either power boat activity be prohibited in Roys Bay or a 5 knot speed limit be extended over the bay.

The present 5 knot restriction only applies within 200m of shore.

The club's safety officer, Peter Rhodes, suggested the changes to harbourmaster Marty Black this week in an email raising concerns about swimmers in ski lanes and on the yacht club racecourse.

Mr Black is expected to address lake user conflicts in a report to the Wanaka Community Board on Tuesday.

Mr Rhodes has suggested a line be drawn between the yacht club on the east side of the bay to Edgewater on the west side, below which powered craft be prohibited or restricted to 5 knots.

He said signs advising swimmers of the hazards were "unlikely to be the answer as the number of signs required would be an ugly blight on the shoreline".

Mr Black described the offending swimmers as "dumb" and that "we are always going to get the odd one, no matter what we have in place".

However, he did not believe Mr Rhodes' suggestions would be acceptable to lake users "and [they would be] difficult to enforce as the lake is for all users, not just the passive ones.

However, what is there [in place at present] is what the community wants, I believe, so any change would have to go out for input," Mr Black said.

Wanaka Waterski Club president Gerald Harraway said he knew nothing about the proposal, and could not comment for the club until he knew more about it.

"I don't disagree part of the area needs to be buoyed off for swimming or rowing or similar, but personally, I think it is too big an area," Mr Harraway said.

Wanaka Lake Swimmers president Claire O'Connell said yesterday the suggested 5 knot speed restriction was a "really good one, but I suppose Marty is right that there would be a lot of problems with it," she said.

"It's looking like, to me, that Roys Bay is an accident waiting to happen between people who don't understand the purpose of the other type of sport, for example swimming, paddleboarding or rowing," Mrs O'Connell said.

The club would write submissions to the council for its foreshore management review.

Club members swim along a buoy line at Stoney Creek and have been lobbying for the removal of a ski lane near Edgewater.

Mr Harraway said the waterski club would get involved because it was lobbying for an extended event course at Paddock Bay.

Most club members used Roys Bay to launch their boats and go up the lake to their preferred activity areas at Glendhu Bay, Parkins Bay and Paddock Bay, he said.

Wanaka Community Board chairman Lyal Cocks said the allure of the lake meant a review of foreshore management and lake use issues is the biggest priority for the town.

The most recent conflict between boats and swimmers occurred on February 28 when two males were discovered between marks three and four on the yacht racecourse, about 300m from the main beach in front of town.

"Both were in the area between the waterfront log cabin and the waterfront ski access lane. Neither were wearing any bright skull caps or hi-vis gloves/wrist bands. I spoke with both of them and they appeared to be American/Canadian males who were simply enjoying a lake swim," Mr Rhodes said.

They were advised of the dangers of swimming in the boating area and to go to a swim only zone.

"To me, it is only a matter of time before a high-speed collision occurs with a swimmer," he said.

Mr Rhodes said they are hard to see and Maritime New Zealand places liability for an accident on boat skippers.

"That's OK, as long as the swimmer is visible, but I would defy any reasonable and careful skipper of a power boat at speed to see a swimmer other than by pure luck, and luck has a habit of running out," Mr Rhodes said.