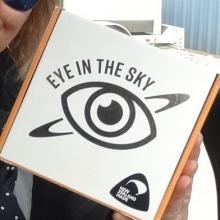 A Queenstown aviator’s invention has been certified as an official flight data recorder by the New Zealand Civil Aviation Authority.

Over The Top Helicopters chief executive and chief pilot Louisa Patterson developed Eye In The Sky along with two of her senior pilots, James Forward and Brad Collier, and experienced helicopter engineer and former CAA investigator Tom McCready.

Work on designing the small, all-in-one unit, which includes a forward-facing HD camera mounted within an aircraft cabin, recording 160-degree footage of pilot control inputs, views and flight data, had started after Ms Patterson’s son James Patterson-Gardner (18) and experienced OTT pilot Stephen Combes (42) were killed when a Robinson R44 broke up in flight in February 2015.

The Transport Accident Investigation Commission (TAIC) investigated the crash but was unable to determine a primary cause, stating had the aircraft been fitted with a cockpit video recording device, some answers may have been determined.

While other products took photos in the cockpit, Eye In The Sky also recorded video and audio, in addition to other elements.

All data was securely stored on an SD card within a tamper-proof housing, capturing 22 hours of the aircraft’s latest video, audio and flight data.

It got the stamp of approval, becoming the first to achieve an ‘‘approved model list — supplemental type certificate’’ in New Zealand, just before Christmas.

That was a single supplemental type certificate which could be used across multiple helicopter types — initial helicopters listed were an EC130, AS350 and R44, and more aircraft types were to be added early this year.

Proceeds from the sale of the device would go to the James PG Foundation, a registered charitable trust established in her son’s memory.